Editor’s Note: The Mboko family has four exceptional children. From the age of 4, the youngest one, Vicky, demonstrated the attitude that makes her one of Canada’s brightest hopes. We reached out to her after her first WTA championship in the 25 K Saskatoon event. Earlier this year, she reached the finals of the 25 k in Monastir, Tunisia. More recently, she got into the semis of Junior Wimbledon in singles and the finals of the doubles with Canada’s other rising star Kayla Cross.

OC: How did you feel on Sunday after your first WTA event

I felt thrilled and shocked that I had won my first pro title, and it gave me confidence that this was what I would be doing and that I could keep going. No matter my age, I want to keep believing that it can happen anytime.

OC: Vicky, you just played in the Mecca of tennis for the first time, Wimbledon. Can you tell us what it was like, your performance, your experience?

I thought it was such an overwhelming experience. Since it was my first time at Wimbledon, it was nothing I expected. It was one of the first times I had played on grass, so I was nervous. In the first match I played, my nerves were coming out because so many people were walking around and very loud. The grass was two different shades of green which I found very odd. I didn’t expect to reach it so far in the draw, but I got over my nerves and focused on what I needed to do to win matches.

OC: As a 15-year-old, what has it been like to be living away from home, travelling over the world, your studies and trying to remain a normal kid?

I feel like I have a much different life than most teenagers my age since I’m always on the road playing tournaments and when I come home, I’m constantly training. I don’t have a lot of time to go out and hang out with my friends, so I’m always playing tennis or doing school most of the time. Due to this, I try my best to occupy myself with the things I enjoy doing alone, like walking around my neighbourhood or hanging out with my sister. 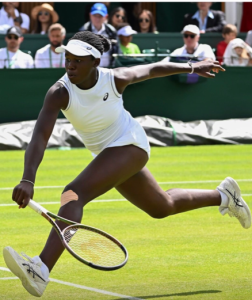 OC: How do you feel going from playing high-level juniors to the WTA pro level? What are the differences?

In the junior tour, everyone technically knows everyone. I find that in the juniors, you can get away with your weaknesses the playing strategies are not very present, and people play to win. When I started playing in the women’s pro tournaments, they could find out your weaknesses quicker and pick out your game more effortlessly. The players are older, so therefore their games are much more mature. But also, going into women’s tournaments, I’m usually one of the younger ones, and I know most of the people I’m playing with are probably going to be older than me, so I don’t feel much pressure playing them.

OC: Do you feel pressure from being seen as one of Canada’s future hopes on the international scene, and if so, how do you deal with it?

I understand why most people think it is stressful, but honestly, I don’t find it stressful. I know there is a lot of media that Is involved with it, but at the end of the day, I’m playing tennis because I find it fun. I am the one who wants to go pro for myself.

OC: What do you feel you must improve in the next 18 months to reach [put a WTA ranking] or win a junior grand slam title?

Well, there are some technical aspects of my training that could also use some improvement and fitness. My goal would be to be around 100-200 in the next 18 months. And it has always been a goal of mine to win one of the junior grand slams. 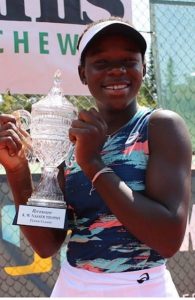 OC: You come from a great tennis family, with supportive parents and siblings that competed at the highest national level. Please tell us [in a few lines for all three] their personality, their assets as a tennis player and how they handle you at home now that you are a star.