It is an honour to introduce the first inductee into the ONcourt Hall of Fame, Ari Novick.

Over the last 45 years, Ari has been a former partner, a friend and a part of our great tennis family.

An accomplished national junior player, Ari trained at the All-Canadian Tennis Academy based at the Cedar Springs Racquet Club as a youngster under his coach Pierre Lamarche. He earned an NCAA scholarship to Marquette University before going on to work in the private sector with All-Canadian Tennis – and then working alongside Pierre – helping to establish the organization as one of the country’s first and finest “junior” academies of its kind.” – Tennis Canada.

Ari was an exceptional coach and was instrumental in the development of many National Champions, including Brandon Chu: “There is no doubt that Ari knows a thing or two about tennis, but to be honest, there are many coaches whom I’ve met along the way who were good at their jobs. What set him apart was that his mentorship and our relationship didn’t just start and end on the tennis court. I had the good fortune to have meals with him and his family, fish with him on Rice Lake after every outdoor season, among other things. I learned that being good at tennis is not the end-all and be-all, as most juniors don’t achieve their “dream” of winning Wimbledon. When I looked at Ari, I saw that there was a good father and a good fisherman behind that person who knew his tennis. Of course, I remember his specific instructions like “quick feet, calm hands,” but the lessons that have made a lasting impression are those of balance, life, and family. Ironically, I now live in Alaska and fish almost every summer day, while I haven’t picked up my rackets in years. Go figure”

After more than 30 years as Senior Director of Tennis Development at Tennis Canada, Ari just retired at the end of 2021.  This Hall of Fame award is bestowed upon him to recognize his contribution and influence to growing the game making Canada a world-leading tennis nation. His first and most significant project was restructuring Tennis Canada’s Coaching Certification system. He was responsible for assisting coaching genius Louis Cayer in translating, structuring and communicating Louis’ “Methode des Actions.”

Louis Cayer, England’s LTA Performance Advisor and Davis Cup coach, sent the following: “Helloooooo Ari, (written like this is intentional as we were greeting each other with this long hellooooo). I heard ONcourt was doing an article on you…. What a great opportunity to mention how great you are.  You are such an amazing friend and colleague.  I always appreciated your common sense to make the coaching simple and practical for all levels. I enjoyed working with you when staying at your house with your amazing family….Or at my place in Montreal, where we would do long brainstorming walks to get out of an impasse.”

As a course conductor, Ari played a significant role in the direct formation of many of Canada’s top coaches. Mike Meaney, Technical Director Tennis Newfoundland and Labrador, mentioned: “I was a mere 21-year-old coach enrolled in the Coach 3 program when I first met Ari. He sensed my apprehension amongst such an older coach candidate group, but his mentorship and patience successfully guided me through the process. I owe the confidence to how Ari coached and handled me as a young wannabe. His mindfulness helped shape me into the coach I am today, 28 years later.”

Danny Da Costa, CEO, OSTEN & VICTOR Alberta Tennis Centre, added:
“Ari’s contributions to Canadian tennis have been immeasurable. His work on the Canadian coach certification system, the TPA and competitive structure will undoubtedly leave a tremendous legacy for Canadian tennis. I always enjoyed Ari’s easy-going approach, level of professionalism and dedication to our profession. Ari is a wonderful role model for other coaches, administrators and club leaders in Canada.” Larry Jurovic, owner of The Tennis Centres in BC, reflected: “I am so grateful to Ari both personally and professionally.  He gave me many opportunities and taught me so much I owe him a lot.  Professionally he has contributed so much to Canadian tennis, and collectively we would not be where we are as a tennis nation without him.”

Some of us were fortunate to have our professional relationship with Ari transcend into a long lasting friendship. Doug Burke, president of Ace Tennis and All Canadian Sports Management: “When I think of Ari, I think of one of the most well-rounded,  people I know; solid, smart, efficient, reasonable, kind, and a fine family man. Ari has been a great friend for many years. During my eighteen-year tenure as National Director for Tennis Jamaica, I appreciated the assistance he provided in Coaching Development and Formation and Policy Development and Structure. He then continued by helping to make my “return” to Canadian tennis/All Canadian a seamless process.”

One person who has known Ari longer than I have is Toronto Lawn Tennis Director and National Coach Simon Bartram: “Random stories…We would take the bus from high school to Cedar Springs but walk the two kilometres from Guelph Line to the club. (back then, you had to cut through an apple orchard) Ari always wanted to hitchhike. Especially in the winter. I would give up and walk when we couldn’t get a ride, and he would stay on the corner and keep trying. I never got to the club before him. He would be in the whirlpool waiting for me and laughing at me when I finally walked in. He was a super intense competitor. He would challenge me to slide contests on the clay. Then on the hard courts. I never won despite having way longer legs. Marquette came to play Ole Miss [where I played] for spring break one year, and it was an unusually cool spring in Mississippi. Like 5 Celsius. Ari was out there with a shirt off practicing just cause it wasn’t Wisconsin. He worked out like crazy. He could do over 60 push-ups in a minute. Probably still can…Although I say it’s because of his short arms.”

The final words come from his partner at Tennis Canada, Vice President Hatem Mcdadi;
“Ari’s contribution over the years is long-lasting and a big part of our success as a tennis nation. He has always had the best interest of our sport at heart, which helped guide his contributions. Ari has always led by example with his core values of hard work, honesty, accountability, and down-to-earth nature that pushes the limits to be the best. Ari was appreciated and respected by many that worked with him”.

Ari, from all of us – Thank you for being a great colleague, a mentor, a role model and a friend. You have made this journey for all of us enjoyable and remarkable as Canadian tennis soared to new heights. We wish you, Carolyn, Max, Kate, Jake and your family all the best on your retirement and enjoy the next chapter of your meaningful life. We cannot finish this article without mentioning your superstar, Gayle, who recently left us. You both validated the saying – “The apple doesn’t fall far from the tree”.

Happy swings, and thank you from Canadian tennis. 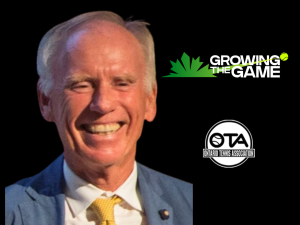 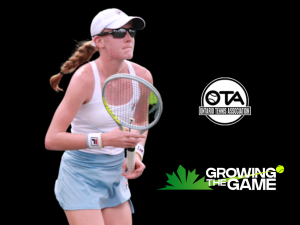 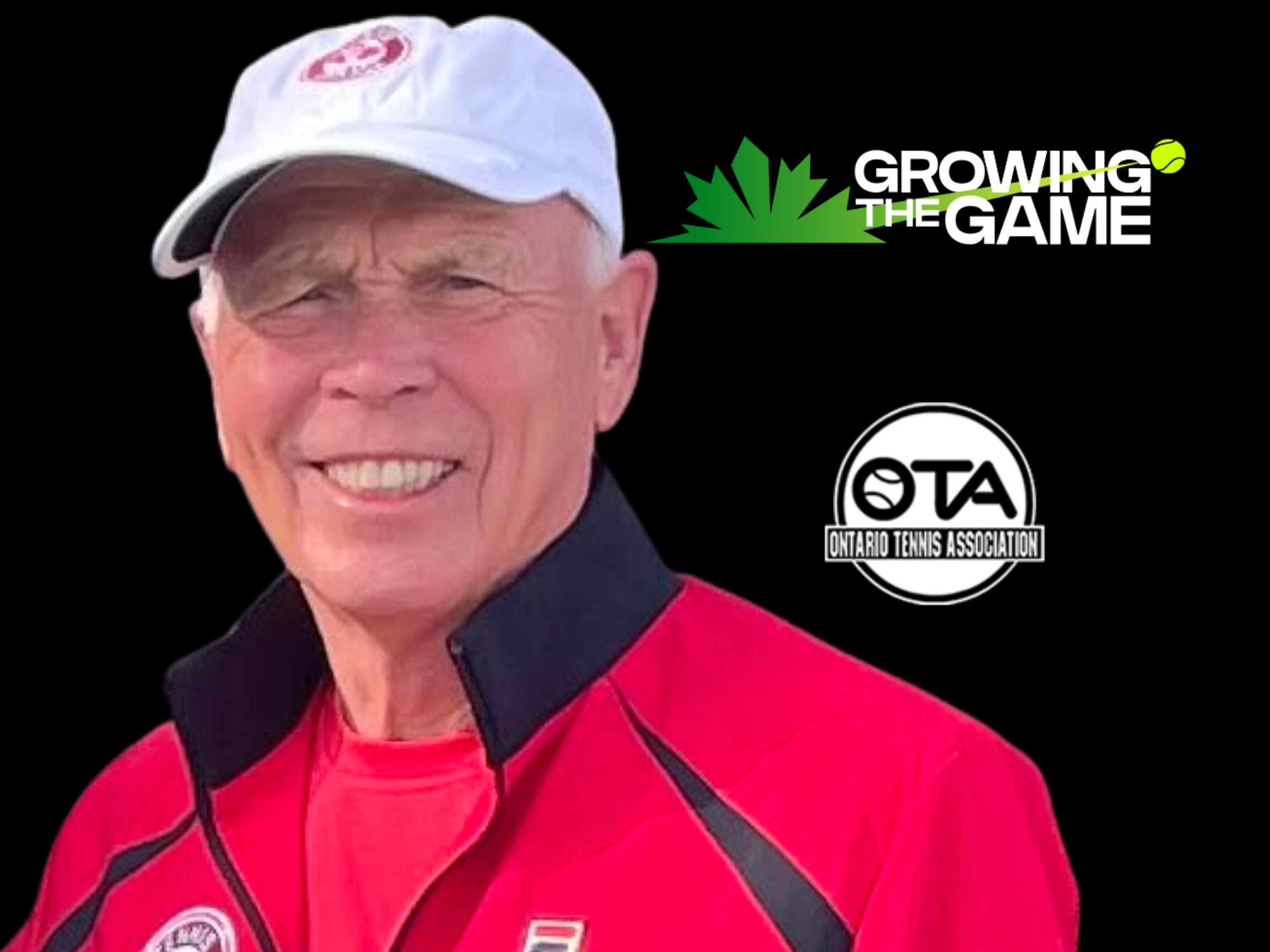 Growing the Game Ontario – The Life of Tennis with Harry Greenan