Oops he did it again!  Victor Troicki that is. After leading by two sets to love he managed to loose the match against one-legged Andy Murray in a match that stretched over two days. Again, because Troicki was in a very similar situation not so long ago at the US Open leading then Novak Djokovic. 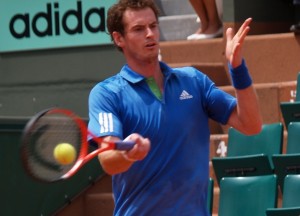 It looked for the longest time like Andy Murray was down and out. In the third set Troicki was up 5:2, but Murray, scrambling in his own fashion was getting everything back.  Not that he was playing great, just good enough not to let Troicki win points too easy.  Forcing him to hit one more shot, taking more risk to come up with another winner. Just getting under his skin.  And perhaps when Murray broke back to go 4:5, and then held his serve at 5-all in the third Victor for a moment thought about that match at the Open.

Murray won the third and then fourth set, and the game was suspended because of darkness (there is no night matches at Roland Garros).

The break clearly worked for Murray.  Not that Troicki was playing badly, just not good enough to overpower Murray the same way he did a day before. And not having this confidence of 2 sets lead.

So eventually Murray prevailed, and moved for the first time in his career to the quarterfinals in Paris, where he will have Juan Ignacio Chela – also a first time quarter finalist as an opponent. 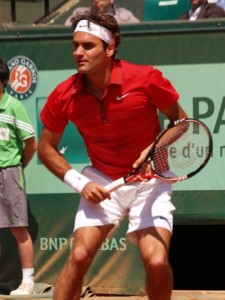 While Murray was struggling on Lenglen, Roger Federer methodically was winning point after point against crowd favourite, and the last Frenchman in the draw – Gael Monfils.  Federer seems to be unfazed by anything that is happening this year.  the fact that he is out of spotlight.  No more number 1 or 2 here (and in any major for that matter) playing some matches on Lenglen, not being mentioned as a favourite (he actually never was in Paris). But is seems to be working for Roger.  He has not lost a set yet, and the match with Monfils was no different.  Although he always did well against the Frenchman, their last match (also in Paris – Barcy tournament) went to Monfils.

But this time was a different story, first two sets went almost too easy to Federer, and only in the third Monfils was able to force a tiebreaker.  Even the fact that Federer was broken 3 times didn’t make any difference.  Monfils looked at times hopeless, almost like there was nothing he could do to change the course of the match.

Next opponent for Roger – Novak Djokovic. Can the former number one stop the best player on the tour in 2011?  Friday afternoon we’ll find the answer.