What a day it was at the Roland Garros!  A major upset, and upset and almost an upset. All in a span of few hours.

It all started with Ana Ivanovic losing in the first round to unknown Johanna Larsson of Sweden.  Ivanovic, a 2008 champion cannot find her form for the past few years. And it’s particularly painful watching this in Paris, where admiration for Ana as a past Champion is still going very strong. 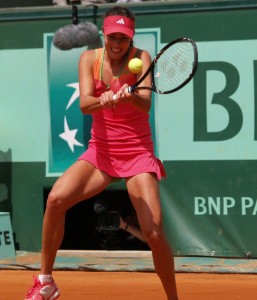 It looked at the beginning of the match as she put her tennis demons behind, at least for this first round against Larsson, but the feisty Swede was hanging there until the set went to a tie-breaker, where Larsson prevailed playing extremely aggressively.  It all looked like an accident at work in the beginning of set number two. Ivanovic won decisively 6:0, and was expected to continue her way to round two.  But Larson found her aggressive form from this first set tie-breaker and won 6:2, ending Ana’s dream of better days in Paris.

Then it was Lukasz Kubot, a journeyman from Poland, who is better known for his doubles play (with Oliver Marach). Kubot only in the past two-three years had some success in singles (and for a relatively short period of time ranked in top 50).  This is his third trip to Paris, and he never won a match here (first round losses in 2009, and 2010). Right now Kubot is ranked at 122, and got to the main draw through qualifying tournament (in the first round he beet Peter Polansky of Canada).

The main draw didn’t look very promising. First round against number 11 seed, and one of the best players on clay this year – Nicolas Almagro of Spain. So Kubot’s chances were relatively small. He also does not have the best of records against top 20 players (2 and 16).  First two sets went as predicted 6:3 and 6:2 for Almagro, and while many of his supporters were disappointed and started leaving court 6, Kubot began his comeback.  He got the third set into a tiebreaker, and after some very aggressive play won. Same play continued in set 4. Another tie-breaker and another win for Kubot. And in the fifth he prevailed 6:4 making Almagro looking over the net in complete disbelief…  “I don’t know what I can say, he was just better player than me”, said Almagro. “At the end, he was just perfect”.

But the almost biggest upset happened at the end of the day.  John Isner is a very accomplished player and a tough opponent at any stage of the tournament.  Rafael Nadal even said that he was somewhat afraid playing Big John in the first round.  But this was courteous Nadal – so everybody thought.  And not many were giving him any chance in that match.  And just like Kubot’s first set went according to plan – a quick win for Nadal, and then set two and three, two tiebreakers won by Isner, and out of a sudden he was leading Nadal two sets to one. 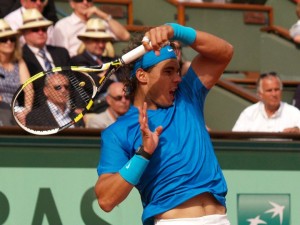 You have to put things into perspective.  All those years Nadal lost in Paris only once.  And never played five sets here.

And he got somewhat scared. “I knew I had to do something in the fourth set, because if we go to another tie breaker his chances are pretty good”, said Nadal after.  So he managed to get a service break.  “This was absolutely huge for me”, said Rafael.  “There are no tie breaks here in the fifth set, so I knew my chances were a bit better”.  And he played the most aggressive tennis of the day in that fourth set.  To the point that Isner admitted later on that he had no legs to go on in the fourth set.  Nadal won the fourth 6:2, and although Isner was still trying his best, the exhaustion forced him to try serve and volley, and be really aggressive.  It worked at times, but not good enough to win.

So after over four hour battle, it was Nadal who won 6:4 in the final set.  And he was almost as happy and relieved as if he had won his 6 title here.  A record he is aiming for.

“I never play my best tennis in the first round here”, said Rafael, “so I am glad I managed to win this one.  It feels good”.