Editor’s Note: The success of Alejandro when others questioned his potential is the best example of “The key to success is determination and perseverance.” His ascension would never have occurred without his family’s total commitment and support.

OC: Alejandro, you started your tennis career in Canada. Can you talk to us about that experience and what you remember most? 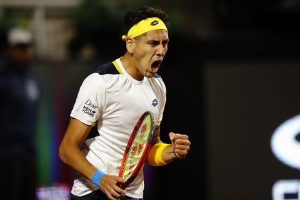 Yes, my tennis career started at a very young age in Canada. I remember driving early mornings with my parents to ACE in Burlington and training all day. It involves sacrifices from a young age. Thankfully my family supported the journey from the beginning and gave it their all so I could be where I am today.

OC: Can you explain to us why and how the transition for you to represent Chile occurred?

Well, my plan as far as I can remember was always to play for Chile. With my parents at home, everything was based around Chile and since I was young I always had that love for the country. So as soon as we had the chance I didn’t think twice and switched countries. I’m always proud to play for Chile.

OC: You and your family never lost belief in your potential to reach the level you now have. How much has that family support made it possible for you to succeed?

I owe everything to my family. They’ve been the only ones who have always believed in me and support all my decisions. Even in the tough times when I didn’t believe anymore they were the only ones to push me and made sure I kept chasing my dreams. Without them none of this would be possible.

OC: When did you realize that your dreams were going to become a reality? 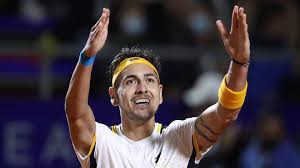 To be honest it took a very long time to really know when I would be able to make it to the big leagues and not need my family’s backing. I think the first time I started to really believe was the year before I quailed into my first grand slam (2020). I think that was my breakout year and I went into Australia with a lot of confidence believing I belong here.

OC: How does it feel representing Chile and how are you treated by the press and the fans?

Deciding to play for Chile and moving there, I think were the best decisions my family and I have ever done. As soon as I arrived to Alto Tenis, my tennis career changed. I also have to thank the people in Chile. Their support has been incredible and I would have never thought everyone would be so welcoming. Whether it be on social media or the fans at the tournaments, they’ve always supported me, motivated me to keep going and I think that’s something special this country has.

OC: You just played Wimbledon describe for us the grass court experience and most importantly your first direct entry in a Slam?

Wimbledon was an amazing experience. I truly have never played a tournament quite like it. Everything just seems so special, how they treat you, the spectators, the grounds, everyone in white. It’s just an unforgettable experience. I’m very happy I was able to win my first round. I definitely want to play this tournament for many years to come.

OC: Will you play the Open in Montreal?

Sadly I think I’m gonna have to miss this year’s Masters 1000 due to that. I’m just coming back from a stress fracture in my arm and with my team we think it might be too soon to push it. Even though all the exams are good, we need time to get back to full gear and finish the year strong. It’s a tough decision but I think it’s the best one for my body. We have to make sure I’m well fit for the rest of the season.

OC: we heard a rumour you might be playing Nadal in an exhibition in the fall. Is that true and where?

The possibility sparked in Wimbledon. This was when I first heard of the opportunity but as recent as a week ago it was confirmed that I would play Nadal in an exhibition. It’s truly an unbelievable feeling and I still can’t really believe it but extremely thankful for the opportunity. Hopefully it will be a great match. It’s definitely going to be in chile we just don’t know the city yet could be Santiago or Viña Del Mar. The match will be late November so there’s definitely lots of time to prepare.