Growing the Game Ontario – Field of Dreams with Richard Hernandez

Editor’s Note: Richard was Tennis Director for 28 years at the Richmond Hill Country Club, is a level 4 Tennis Canada coach, is co-president and owner of Premium Court Contractors and owner operator of the Tennis Farm, site of ten grass courts

OC: Richard, you have been involved in tennis all your life. From the Caribbean and Canada, how did you come up with the idea of building grass courts? 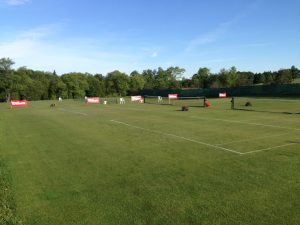 As a tennis coach, player and enthusiast, I have always dreamt of having my court.  I grew up in the UK and spent a fair amount of time playing on grass.  We purchased this property in 2006 and decided to build a court after building our home.  We finally agreed we would begin with four courts. We went with grass with sandy soil conditions (excellent for drainage).  Also, it was an affordability issue.

OC: Can you please provide insight into how the project was developed, how long, what steps, the building, and the grass?

The process was quite simple other than time.  We graded the space and then fine-graded it before applying sod.  The sod took time to take firmly with rolling and top dressing, but a few soft pockets remained even after one year.  Eventually, we could offer a two-adult event play, which was greatly rewarded.  The players were pleasantly surprised by the playing conditions.

OC: How much maintenance do the courts require, and how often are they used?

Maintenance is daily, primarily watering, cutting, top dressing and rolling.  Not all procedures happen daily. The primary issue is pest control, including grubs and ants.  Ants are probably the most difficult to deal with as the ant hills protrude up, causing inconsistent bounces.  The courts are only used for 3-4 OTA tournament events per year.  The effort to keep them up in playing condition is too difficult to consider doing more. 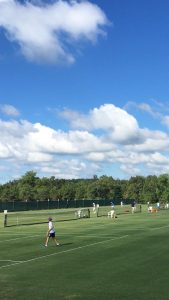 OC: You provide a great experience and opportunity for Ontario players. How has the response been?

The Tennis Ontario and the tennis community have highly supported our events.  Before Covid hit, we hosted the annual Ontario Grass Championships and would have entries for all age groups, boys and girls, providing a 10-day grass court experience.  Daniel Nestor used the courts for a few seasons in preparation for the grass court stretch in Europe.

OC: What is your take on the future of Canadian tennis, the pitfalls, the opportunities and what would be your wishes for the sport in Canada?

The greater the number of skilled players competing in our competitive structure, the greater the possibility of success for Canadian tennis.  Grass tennis is a test of skills.  Players need to play the court first (actually, they always should play the court first), but grass tennis forces players into this thinking immediately.  A pitfall for all players is to avoid developing a more complete game chasing points and UTR ratings.  Parents must have their children exposed to principled, strong tennis leaders committed to a young player’s whole character and skills development.

Editor’s Note: The Mboko family has four exceptional children. From the age of 4, the youngest one, Vicky, demonstrated the attitude that makes her 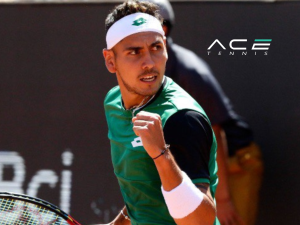