Lessons From a Davis Cup Marathon

BY SCOTT LANGDON via THE OTA

In 1975, Dale Power, ranked number three in Canada and with no international ranking at the time, played a record-setting Davis Cup match against Columbia. It lasted five and a half hours.

Daniel Nestor’s stunning upset of Sweden’s world number one Stefan Edberg in 1992, Vasek Pospisil’s singlehanded heroics to beat Israel and propel Canada back into the World Group in 2011 and Pospisil and Denis Shapovalov’s run to the final against Spain in 2019 are recent highlights from Canada’s annual hunt for the Davis Cup.

But there were lean years, decades even, from the early 1900s until 1990 when the country made its first World Group appearance following its creation in 1981.

Those lean years were not without their notable rubbers, or matches, and great players, however. One such match in the 1976 Davis Cup was played on Oct. 17, 1975 at the Rockland Centre, Montreal. It was contested into the wee hours of the morning and the second set remains a record for games played in a single set in the 120-year history of the Davis Cup.

Dale Power, ranked number three in Canada and with no international ranking at the time, faced off against the Colombian team’s top player and third-ranked in that country, Alvaro Betancur, in an Americas Zone North tie. Betancur was ranked 68 in the world, according to www.atptour.com.

Power had just returned to full-time tennis about one year before the Davis Cup tie. He had been on a tennis scholarship at Oklahoma City University from 1970 to 1973 and decided to try professional hockey after he graduated. He attended a walk-on tryout with the Fort Wayne Komets, an affiliate of the NHL’s Pittsburgh Penguins. He not only made the team but was a leading scorer in the 1973-1974 season with 29 goals and 36 assists. A knee injury ended his hockey comeback the following year. He had been drafted by the Montreal Canadiens in the 1969 NHL Entry Draft.

Betancur advanced beyond the first round of the U.S. and French Opens during his career and had wins against notable players such as Nick Saviano and others. His highest ATP ranking was 60 and he represented Colombia seven times in Davis Cup. A recent article on www.daviscup.com refers to him as a candidate for Colombia’s all-time Davis Cup “Dream Team” and describes him as an “excellent player”.

Power won the first set against Betancur 6-4 and dropped the record-setting second set 22-24. The third set went the Colombian’s way 6-2, but Power rallied to win the final two sets 6-3 and 7-5 in five and a half hours. The match ended at 2:30 a.m.

The record-setting second set was equalled during a USSR/Netherlands tie in 1987. Set tie breakers were not introduced to Davis Cup until 2016.

Power recalls there being “maybe 50 to 100 spectators” when the match finally ended early in the morning of October 18. One of them was Ken Dryden, Montreal Canadiens’ Hockey Hall of Fame netminder. Power recalls Dryden speaking with him after the match, but amid the excitement and exhaustion says he can’t remember the details of the conversation. 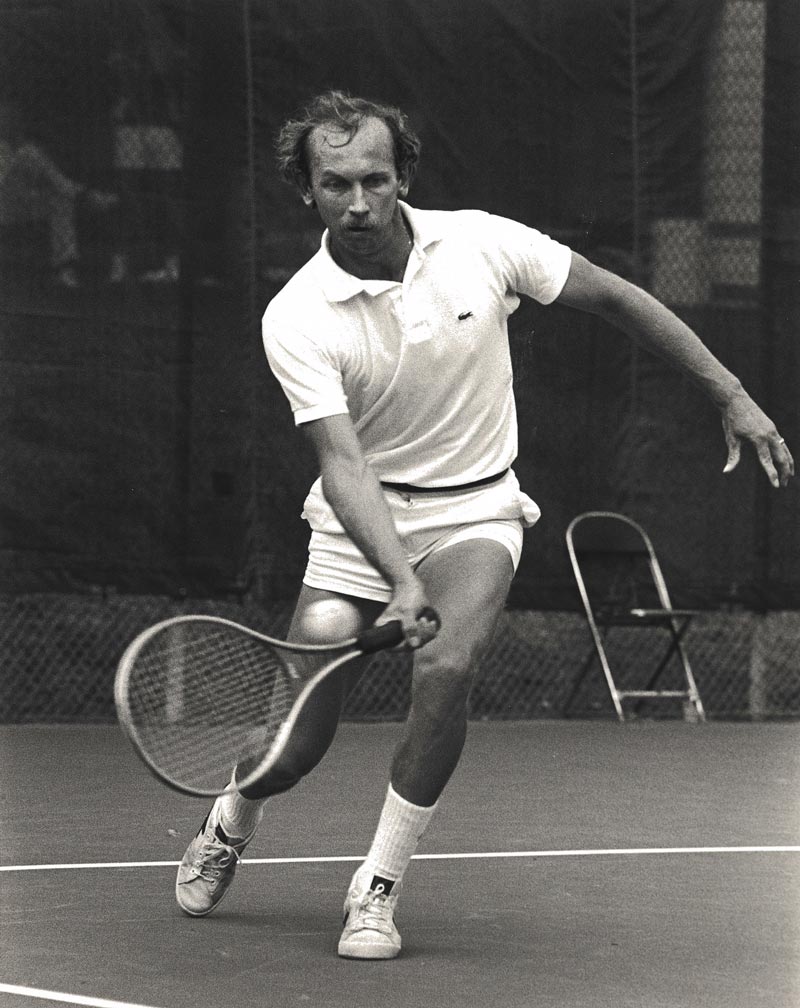 “I asked Dale about his shoulder after the endless serving in that match. I was interested to know what that felt like,” he recalled during a recent telephone interview.

“It was an absorbing match,” Dryden continued. “It was as if the match, itself, didn’t want to end. I kept thinking at some point I have to get home. I’m pretty sure we had a game the next night at the Forum. But it was like a conspiracy. It just wasn’t ready to be over. The two players recognized they had put so much into it that it was unacceptable to lose.”

The Canadiens did play later that night, tying the Philadelphia Flyers 2-2.

Power recalls the Canadian team was confident going into the tie against Colombia, but he added they didn’t know a lot about Betancur other than his ATP ranking. Anecdotal information suggested he was a strong baseline player with consistent, accurate strokes.

“Alvaro, as it turned out, had an all-court game. He had a consistently accurate serve, very solid baseline game and excellent return of serve. He was a superb match player. That match was my first big win. To tell you the truth, I don’t know how I won,” he said.

Managing the mind and emotions

Power and Betancur talked with www.ontennis.ca about that record-setting Davis Cup match and provided insights for recreational and club players about managing the mind and emotions in tennis.

“Those were the days of wooden racquets. I was an all-court player and a good volleyer. I didn’t want to get into long rallies from the back with him because we thought that was his strength. Having a plan is important. Mine was to get to the net as often as possible and make him pass me. And, of course, hold my serve.

“I wanted to play my strength against his and try to make him play my game. That meant get to the net, hit a deep first volley and establish a pattern of play while watching for patterns from him. Understanding your own strengths and weaknesses is key.

“A big part of competitive tennis is mental. Try to make your opponent play your way. Of course, he is trying to accomplish the same thing. That is what makes it challenging.

“Most players have a side they prefer. Find out in the warm-up by hitting to both sides. Look for things such as your opponent’s grip. If it’s a western forehand, for example, you can assume volleying will be difficult. Once you have determined strong side, weak side, play to his strength to open his weakness.”

Betancur says it was experience that helped him manage the pressure that night in Montreal and in other matches. “It was a long match against a great player like Dale Power. The pressure is the same whether you are playing number one or two in Davis Cup. Playing tournaments teaches you how to compete and manage emotions, which gives you a great direction in life,” he said.

Power added: “Pressure is always necessary to enhance one’s performance. I used to handle it by constantly analyzing my opponent’s strengths, weaknesses and strategies and by attempting to be the most consistent player possible. Return any ball that bounces on your side of the net, or that you take in the air, whether it is defensively, aggressively or just getting it back. You can’t be afraid to see a winning shot from your opponent.

“And be as congenial as possible with all officials. They can disrupt your concentration. Try to make sure they like you,” he added with a chuckle.

For the full article by Scott Langdon, visit the OTA’s ONTENNIS

The OTA is a contributing partner for ONcourt

The Education of a Coach: Coaching Rising Female Stars

BY DIANE W. DIMMER VIA THE O.T.A The last Canadian woman to win the Canadian Open (now National Bank Open) before Bianca Andreescu was Faye