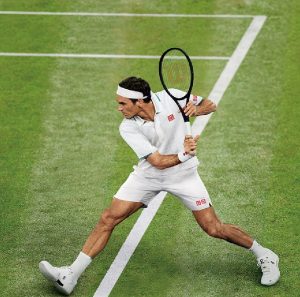 A week ago today, Roger Federer walked into an interview room at Wimbledon to talk about his historic eighth title. These Monday “day after” interviews are meant to be very fluffy, lots of fun, and reflect on what it’s like to win the biggest prize in our sport. A continuation of the celebration…

It certainly started that way, and then we got some serious “straight talk” from the Swiss champion. He touched on strategy and player development. He talked about coaching philosophies.

He then exposed the greatest lie in tennis… that the net does not work anymore in our sport.

In his own, subtle, sophisticated way, he called out coaches, and he called out players. He especially shook his head at the strategy of younger players, who hope to be successful at Wimbledon against the greats – with a one-dimensional baseline game. He called it how he saw it.

Let’s go through the interview and clearly understand Roger’s point of view. Just a reminder that very few players speak this openly about our game. Comments like these carry a lot of weight and don’t come along that often.

“My head’s ringing. I don’t know what I did last night. I drank too many types of drinks, I guess. After the ball, we went to a bar and there were almost 30 to 40 friends that were there, so we had a great time. I got to bed at 5 am, then woke up and just didn’t feel good.” Roger Federer

If you can’t celebrate winning a record EIGHTH Wimbledon title, what can you celebrate?

“Every generation definitely is different. Since my generation and Rafa’s generation, the next one hasn’t been strong enough to push all of us out really, so that has been helpful for us to stick around.” Roger Federer

Roger is just warming up here. He correctly asserts that players younger than Roger and Rafa have not been able to remove them from the pinnacle of the sport. He does not get into the “why” yet. He is just laying down the groundwork…

“They can choose not to play that way, too, if the coach has taught them to play differently. I know you can easily get sucked into that mode when you don’t want to attack, but if you can’t volley you aren’t going to go to the net.” Roger Federer

“IF YOU CAN’T VOLLEY”

Bang. Take that #NextGen. Right between the eyes.

These players are simply not fully prepared/equipped for the task. They are trying to do it with an incomplete set of tools. This next generation of players loves to slap a forehand and a backhand from the back of the court… but finishing points at the net is much more a weakness than a strength.

Interesting that Roger mentions coaches here (of which I am also one). Globally, the coaching community fixates much more on the back of the court than the front of the court. Tons of forehands and backhands. Precious few volleys. What is universally lacking is the development of the correct continental volley grip, fundamentally sound “catching” technique, and the high percentage strategies to transition from the baseline to the net.

When a player finally reaches “The Big 4” for a shot at the title, they think they are ready. They are not ready. They can’t volley. They don’t have 10 years of volley work under their belt, so they completely shy away from the net under the bright lights.

“I have played almost every player here that wouldn’t serve and volley. It’s frightening to see this at this level. I look at the stats and go into whichever round it is and see that the guy I’m going to face is playing 2 percent of serve and volley throughout the championships. I’m going, ‘OK, I know he’s not going to serve and volley’, which is great.” Roger Federer.

If Roger Federer is frightened, then we should all be frightened too.

The new generation of players are too one-dimensional. They have spent their entire junior careers mindlessly, endlessly hitting groundstrokes. They love to grind. They boast about it. They are completely missing the point.

You really think you are going to out-grind Murray, or Djokovic, or Nadal, or Federer, or Thiem, or Nishikori, or Goffin, or Ferrer? Come on now…

The new generation can’t serve and volley. Period. The reason is simple. From ages 10-18, during the formative growth/improvement years, they overwhelmingly dismissed it. Coaches can also get more “wins” on the board quicker for juniors by developing the baseline. It turns into complete overkill, and incomplete players are now flooding our game.

It is frightening, Roger. The youth think they are prepared. Far from it.

QUOTE 5 – Good Things Do Happen There

“Then we are talking about grass, it was playing fast this week [compared with the first week]. I wish that we would see more players taking chances up at the net because good things do happen there. You want to be there and have to spend some time up there to feel confident and good there.” Roger Federer

Of course, they do! It does not matter if you serve and volley, or approach and volley. The average tournament win percentages at the front of the court for both men and women are ALWAYS higher than the win percentages from the baseline.

Federer then responded to a question that maybe players were following the lead of Murray and Djokovic, who seemingly dominate from the back of the court.

“They are very different. Andy has a lot of variety in his way but, yes, a slugfest with Andy and Novak from the baseline, or Rafa for that matter, good luck. If you are No. 50 in the world, it is not so simple to take them out.” Roger Federer

How in the world are you going to out-hustle, out-run, out-work, out-maneuver, or out-hit Novak or Andy or Rafa from the baseline? That’s their sweet spot. You have got to find other areas to attack… such as the net.

When Roger says it’s frightening to see players not have the ability or confidence or know-how to serve and volley on grass at Wimbledon, it’s high time to sit up and take notice. Now is the time to re-adjust our global tennis development paradigm.

The net worked yesterday. It works today. It will work tomorrow as well.

This is Part 2 of this 5 part blog series.