Tennis & the Media: What Really Matters? 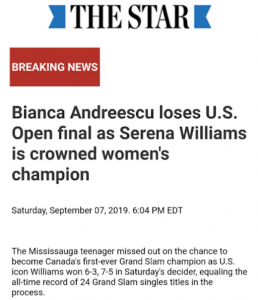 In the evening hours of September 7, 2019 the Toronto Star emailed breaking news informing its readers that Canadian tennis star Bianca Andreescu had just lost her chance of winning Canada’s  first ever singles Grand Slam title losing to Serena Williams 3:6, 5:7. As one of thousands of  tennis fans watching the finals and Bianca winning the title I was wondering how such a mistake could possibly happen. Respected publication with many writers and journalists on staff, watching possibly a historical moment in Canadian sport, and yet sending an email blast like that?

And then I realized that something similar might have happened that same  year in Paris at the Roland Garros. Arriving at the Philil Chartier court, I remember seeing this newspaper reporter frantically typing something even before the match between Rafael Nadal and Dominic Thiem had started. I took a few photos and completely forgot about it.

After Bianca “lost” her US Open finals I looked at those photos again…and then Eureka….The journalist was working on two stories at the same time. One in case Rafa wins, and the other – if Thiem gets his first Slam title. Long, long before the match was over he decided that Thiem would not come back, and left a blank space just  to put the final score into the story. He already had all the tournament stats, Rafa accomplishments etc. I guess right after the last point he filled in the blanks with all the missing info, and viola…the story was ready to be published…but was it really…with focusing only on the final score, with some cliché writing was it truly a journalism.  That raises an even more important question. Is the speed of information paramount to its quality?

Is this respectful towards the players, tennis fans and the sport in general? Can “always being first” approach  be more important than the traditional, old fashion, honest reporting? And can the speed of the information and tight competitive environment be an excuse for the pursuit of journalistic excellence? And why writers like the legendary Bud Collins wrote such insightful stories that have earned him respect from players, tennis fans and tournament organizers?

Our sport is getting more and more professional at every level. This  professionalism needs also to be present  in the reporting, photography, and press conferences. We do not see tennis from that angle often, if at all, but the pursuit of being the fastest and the most “original” in asking questions takes priority over knowledge. Sadly this is happening at the biggest and most important tennis events. Few years ago Rafa Nadal at the Miami Open was congratulated by the journalist for winning his match, and asked how he felt. Rafa politely corrected the journalist that he just lost his match. Without missing a beat she said: “yes I know but can you still answer the question?” Similar thing happened to the French doubles specialist Nicholas Mahut. When corrected by Mahut the journalist simply said: “oh ok, so what happened out there?” and admitted that he wasn’t watching the match at all.

But my personal favourite is the question that was asked  Italian star Matteo Berettini: “Can you take us through the match and what happened on the court?” In fact Berreting withdrew from the tournament due to the injury before the match.yet.

I certainly hope that in the era of excessive speed of information and the chase for most ridiculous information “just to be different” Roger, Rafa and Djokovic were once asked about their opinion about the flowers at the Wimbledon grounds, there will be more and more respect and interest in true, honest and in depth reporting. Otherwise we all be limited to just reading the scores of just finished matches, tabloid style tournament reporting, and no respect and support from the players to work on the stories.

The warning signs are coming from the players themselves, and those who are considered the most accommodating ones. Roger Federer on more than one occasion told reporters that they have to be more prepared when asking questions (“do your research”). Rafa Nadal more than once refused to answer questions that had nothing to do with the game, and once told the reporter that the question was simply a BS.

Same goes with photography. The paparazzi approach will only hurt the game. Pursuit of more and more sensational photos will ruin the beauty of tennis. There is a reason why photos by the late Richard Martin from L’Equipe are the icons of sports photography, there is no sensation in them, just focus on capturing the moment.

The need for humanity in sports journalism, and that there are more important things than sensational photos, has been shown most recently by Simon Kjaer, the captain of the Danish soccer team.  After helping his teammate who suffered cardiac arrest, Kjaer formed a player’s shield so no one could take dramatic photos of his Christian Ericksen fighting for his life.

Even in sport there are moments that no one should see. Not everything has to sell.  The pursuit of sensation cannot kill the humanity of our lives, and the lives of others…I hope that professional journalism and reporting will just be like that. Professional, respectful and knowledgeable. Our sport, tennis fans and the players deserve that.

By Peter Figura, Contributing Editor & Author of “The Future of Tennis: A Photographic Celebration of the Men’s Tour”