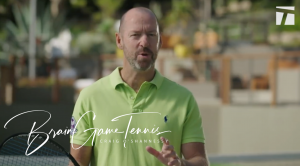 Rafael Nadal hits more forehands than his opponents at the Rolex Monte-Carlo Masters. He also hits them harder. Tennis enthusiasts would not blink an eye believing those two common-sense statements at face value. Except they are false.

An Infosys ATP Beyond The Numbers analysis of 12 Monte-Carlo matches from 2017-2019 compares Nadal’s forehand metrics to his opponents. The eye test quickly identifies one of the most potent strokes our sport has ever seen – especially at sea level on a clay court. But the stats sheet shows opponents stack up better against it than we would have thought. The twelve matches in the data set are below. Nadal won 11 and lost one.

Below are five focus points that may surprise you regarding Nadal’s forehand performance versus his opponents.

1: Nadal Hit Fewer Forehands
Our image of Nadal – especially on clay – is a player willing to go to all locations on the court to hit a forehand to rough up his opponent’s backhand. But in the 12 matches in the data set, his opponents actually struck more forehands than Nadal did.

2: Nadal’s Forehand Speed
Nadal is well-known for scorching forehands on the practice court but not really bringing the same blazing heat off that wing once the match starts. Regardless, you would naturally assume Nadal hits a harder forehand on clay in Monte-Carlo than his opponents. It’s not what the data says.

The match that had the largest disparity was against Edmund. The Brit averaged hitting his forehand 134 km/h, while Nadal was 121 km/h – a 13 km/h difference. There were only two matches in the data set (vs. Nishikori & Fognini) where Nadal averaged hitting a faster forehand.

3: Forehand / Backhand Ratio Almost Identical To Opponents
When Nadal is on clay – especially in Monte-Carlo where he has won 11 times – we would assume his ratio of forehands to backhands is much higher than his opponent’s. It’s simply not true.

Edmund is an opponent who also thrives on turning forehands into backhands in the Ad court. He hit 68 per cent forehands for the match, while Nadal only managed 61 per cent. It may feel like Nadal is consistently winning the battle to hit more forehands, but the stats sheet says otherwise.

4: Nadal Hits His Forehand From Deeper In The Court
Nadal likes to back up as far as possible to return serve. But once he has returned the ball and a rally blossoms, he is actually hitting a higher percentage of rally forehands inside the baseline than his opponents.

When Nadal defeated Nishikori in the 2018 final, he hit 48 per cent of his forehands inside the baseline. Nishikori was only at 16 percent.

5: Nadal’s Opponents Make Contact Much Higher
Nadal’s heavy topspin does indeed make his opponents have to make higher contact, but it’s not as much as you think.

The difference is only 12cm higher, or around five inches. That’s roughly the same height as two tennis balls stacked on top of each other. When Nadal defeated Dimitrov 6-4, 6-1 in the 2018 semi-final, Dimitrov’s average contact height was 1.24 metres, while Nadal was at 1.16 metres. Those two measurements were the highest for both Nadal and his opponent in the 12-match data set.

Nadal’s heavy forehand is undeniably a significant weapon for the Spaniard and will be relied upon once again in his chase for an unprecedented 12th title in Monaco.