Catching Up With Rob Seguso (a.k.a Goose) and Carling Basset-Seguso

Doug and Ken actually were roommates and doubles partners first, before Ken and I became partners. We were a close knit team. I have fond memories of taking van trips to play matches against other universities, all over the United States. In my second year at SIUE we had a lot of success beating a number of top ranked colleges including the number one ranked team at the time. I remember one spring break, it must have been five of us piled into Ken Flach’s car and drove from Illinois to Florida to stay with my family. We had so much fun traveling as a team.

In a chat with Rob recently, Doug Burke was able to get an update about how he, his wife Carling, and their family are doing during these times, as well as some insights on their careers.

QUESTION ONE
Doug Burke: I’d like to start by saying, thank you for taking the time to speak with us today, it is a real pleasure. How are you and the family doing?

Rob Seguso: We have been doing well thank you. We are in Bradenton, which has been our home for the past 18 years. The younger children, Lennon (Lenny) and Theodora (Teddy) live with us, while Holden, Carling Junior and Ridley are doing well.

Carling Jr. is married to a professional soccer player for MLS. He used to play for Atlanta United but was recently traded to the new South Florida Team Inter Miami CF. We were in the process of organizing a move to the east coast of Florida, Boca/Delray region; due to his recent trade, them and the grandchildren are moving, and given that is where I grew up, but due to current circumstances we are staying put for the meantime! Until things subside we are preparing for the move and keeping active with our children. We are grateful to have Carling’s mother nearby and feel fortunate that the children get to spend lots of time with their grandmother.

QUESTION TWO
Doug Burke: In light of the current COVID-19 pandemic, how are things generally in your area- and how is tennis being impacted?

Rob Seguso: It’s interesting because right after my pro career, I was fully involved with my older children playing competitive tennis and helping them navigate  the junior circuit, that being said as of late, I have been less involved in the tennis world. I do however, live close to IMG and operations seemed to have slowed down, and the organization is taking precautions, – much like everywhere else.

QUESTION THREE
Doug Burke: We know that you and Carling have three older children (Holden, Carling Junior and Ridley) who were all successful junior and NCAA players. Are or will your two younger kids (Lenny & Teddy) be involved in tennis ?

Rob Seguso: Lenny and Teddy do play tennis recreationally, but not competitively. Carling especially is very physically active herself, and we have encouraged the children to try a mixture of things! Currently, they participate in horseback riding, golf and as I mentioned a bit of tennis. We will always love tennis but we are happy to give our children the opportunity to enjoy other sports!

QUESTION FOUR
Doug Burke: Do you, Carling and the family ever venture up to these parts (Toronto) where Carling is from?

Rob Seguso: Yes, we do. We really enjoy visiting Canada and really appreciate the beautiful outdoors. We started bringing our older children to summer camps in Muskoka Woods when they were kids, something that we have continued with the younger children- although for the time being who knows what the summer will have in store. Unfortunately, given the current travel bans we are unsure when we will visit again.

QUESTION FIVE
Doug Burke: You and Carling have both received numerous accolades throughout your stellar tennis careers, what do you both consider to be your finest achievements?

Rob Seguso: For me there are a few that come to mind. For doubles specifically; the Olympic doubles gold medal which Ken and I achieved in 1988, winning 4 grand slams, and being ranked the number one doubles player in the world are all moments which I could never forget. From a singles standpoint, I think winning matches against several players who were ranked number 1 in the world at different times, such as; John McEnroe, Jimmy Connors, Thomas Muster and Jim Courier is a highlight for me! Carling refers to getting to the semi finals of the US open at such a young age, and attaining a world ranking of number 8 as her top achievements.

Rob Seguso: Doug and Ken actually were roommates and doubles partners first, before Ken and I became partners. We were a close knit team. I have fond memories of taking van trips to play matches against other universities, all over the United States. In my second year at SIUE we had a lot of success beating a number of top ranked colleges including the number one ranked team at the time. I remember one spring break, it must have been five of us piled into Ken Flach’s car and drove from Illinois to Florida to stay with my family. We had so much fun traveling as a team. Ken was always full of good energy and ready for an adventure. I vaguely remember that on our way we had some gas issues, but our group of guys didn’t let that slow us down for a moment, and we were back on the road in no time.

Doug Burke: Thank you so much for sharing Goose. We wish you and your family all the best, and please stay safe during these difficult times. 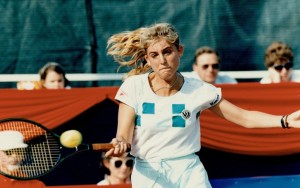 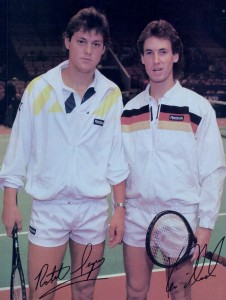 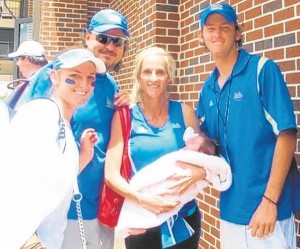 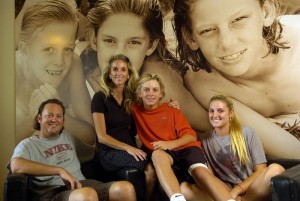