On the second day of the French Open, Canadian hopes of having at least one man and one woman in the second round were suddenly crashed when both Frank Dancevic and Milos Raonic lost their matches.

For Frank Dancevic it was his first main draw appearance in Paris. And he qualified after three solid performances. But against Simone Bolelli of Italy he simply couldn’t  do much. The loss in four sets although disappointing, it wasn’t really a big surprise. Bolelli played really well here in Paris, and qualified as a lucky looser.  And it was particularly his forehand that didn’t give Dancevic a chance to get close in a match. 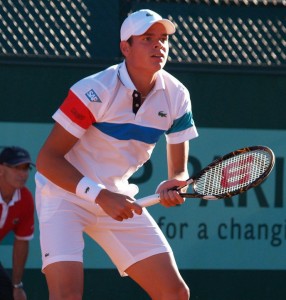 A bit different story with Milos.  After so much success easily this year, all eyes were on his first round match against Michael Berrer of Germany (on of 15 German players oin the main draw!) After all, he was the first ever Canadian male player to be seeded in the Grand Slam tournament.  Currently at number 26 on the ATP Tour, the highest Canadian player ever ranked, and yes, this was the next Grand Slam for Milos after that memorable run to the round of 16 in Australia.

Michael Berrer is probably not a household name in tennis. Not even in German tennis. A tenis journeymen, ranked as high as number 42 (in 2009), and at the age of 30 playing his 3 French Open (not wining a match in previous appearances), but on Tuesday, he was a clearly better player, more composed, with a game plan. Not intimidated by Milos 6ft 5in frame (Berrer is 6 ft 4in) nor his powerful serve (Berrer had 5 aces vs. 7 from Milos.

But it was probably more of the composure on the court, and the game plan that decided the outcome.  Milos seemed to be bothered from the very early stages of the match, and could not really settle.  Although after loosing first set, and being down a break, he managed to even the score, that was all he could do on Monday evening in Paris.  Third and fourth set went relatively quickly to Berrer, and earned his a spot in the second round where he will meet another veteran – Frenchman Arnaud Clement.

So although the loss is somewhat painful (Milos had a solid chance to get to the 3rd round where he would most likely meet Andy Murray) but the experience hopefully will pay off, like it did for the young Canadian in the past.

But there was also a happy moment for Canadian tennis on Tuesday night in Paris. Thanks to Aleks Wozniak who always considered Paris her favourite tournament. And despite the fact that the qualifying tournament was her first match play since March, she won three matches without loosing a set, and continued that performance in the main draw.  In the first round she made a quick work of Jumri Namigata of Japan winning 6:1, 6:1 in just over an hour.

Her next opponent – World number 1 Caroline Wozniacki. And that match is on Wednesday at 11 a.m. on Court Philippe Chartier.