Michael Emmett: “Is the One-Handed Backhand Making a Comeback?”

The shot most regarded in tennis circles as the prettiest, the one-handed backhand, seems to be on the way back. Two of the men in the final four at this year’s US Open (Richard Gasquet & StanWawrinka) both dial it up with one hand. And most of the time, these shaped, arching balls, with perfect depth, leave their opponents scrambling from corner-to-corner, chasing bounding balls with limited opportunity to counter attack.

These penetrating shots are lethal, scorching and most of the time unreturnable, and the major weapon for these European baseliners. Gasquet, Wawrinka and Mikhail Youzhny, with backhands to-die-for, are the envy of the tennis world. These backhands are ridiculous weapons and some of the best we’ve ever seen in the sport. This trio of talented players rely so much on these sling-shot type actions – this is there go-to shot under enormous pressure and often it gets them out of difficult break-point situations. Former super star players like Sampras, Lendl, McEnroe, Becker, Edberg, Vilas and Nastase were nowhere close to this high level of attacking backhand. They had a backhand that would never be classified as the best part of their game. They ‘got by’ with this shot but it was never a weapon.

Long gone are the days of weak, defensive sliced backhands with little or no pop. These guys are unloading and driving the ball like we’ve never seen before. They are delivering each and every backhand with tons of speed, spin and precision, often pin-pointing the lines with astonishing regularity.

In this era of tennis, the one-handed backhand is better than it’s ever been. Have we ever witnessed better single handed backhands at any time in the open era? For me that’s an easy answer. Of course not – these guys are hitting it over 100 MPH at times with crazy top spin that makes it unrealistic for their opponents to counter attack, or in a best case scenario, they can just get it back anywhere in the big blue court. Gasquet and Wawrinka made it to the semi-finals of this Grand Slam because of their incredible one-handed backhand. When interviewed post match they always made mention of their favourite shot – their ONE-HANDED backhand. This is their bread and butter and they’d be lost without it! 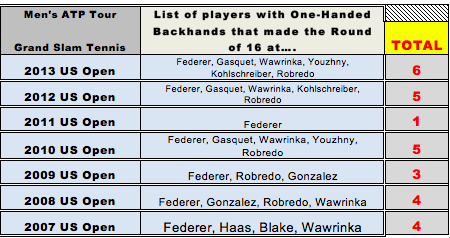 On top of Gasquet, Wawrinka and Youzhny, you’ve got Philip Kohlshreiber, Tommy Robredo and Roger Federer – all who made it to the round of 16 in the 2013 US Open – and all possess exquisite, poetic and graceful one-handers. Some believe Federer (17-time grand slam champion) has the weakest and most erratic backhand of the aforementioned sixsome.

Other ATP top 30 players with remarkable one-handed backhands are Tommy Haas, Grigor Dimitrov and Nicolas Almagro. These are 9 players that have all been in the top 26 in the world at some point in their career. Dimitrov, a young up-and-comer, almost beat Nadal on two separate occasions in 2013 with his inspiring, fabulous one-hander, taking Nadal to the maximum three sets in both matches.

Obviously technology has something to do with the resurgence of this type of artistry. The one-handed variety always looks so fluid, gorgeous and effortless. The way these guys are striking the ball would have been impossible in the days of Laver, Rosewall and Hoad with their wooden racquets and dull strings.

I believe the one-handed backhand will make a mini comeback of sorts. Mostly due to the fact that we are seeing more players in the Men’s game achieve outstanding results with this magnificent shot. Having two men make it through to the semi-finals of a slam is great news if you are a fan of the one-handed backhand.

The two-hander is here to stay and guys like Murray, Nadal and Djokovic are the proof. Kids will emulate these guys first because they own 21 Grand Slams between them and will likely dominate for the foreseeable future. Coaches are more reluctant to start kids with a single handed stroke because it is much more difficult at a younger age. So there is no doubt, in my opinion, we will always see more two-handed backhands but it is interesting to me how the times are changing and how the one-hander is more in play than it has been in a long time.

Because only a small percentage of the tour is using this esthetically pleasing shot, it looks like a completely different shot to the average player. This level of variety is often a major advantage, usually the one-handed player has an excellent slice backhand to compliment his heavy topspin ball and this works as great one-two punch. The element of surprise cannot be overlooked and the ability to change speeds and spins in easier for the one-handed player. The great disadvantage (for the single hander) is on balls that bounce over the shoulder. This is the major reason why Nadal has owned Federer in their career meetings – Nadal has won 21 of his 31 encounters with the Swiss superstar mostly due to Fed’s inability to handle the high topspin ball coming of Nadal’s blistering forehand.

Of all the one-handed backhands on tour right now – Stan Wawrinka’s is the best. He is hitting it with enormous confidence and for this reason he’s right on the heels of the game’s future Hall-of-Famers and with a little luck in the coming years he will be a Grand Slam champion. And if he is fortunate enough to get this elusive title he will owe it all to his incredulous, stunning backhand.