After surviving the first day in New Taipei with over 90 kids, I had an hour to get ready for dinner with the General Secretary Philip Liu of the association and two of Taiwan’s top players who had recently won the Asian Championships in doubles. This was a special occasion to honour them and have them receive the traditional red envelope which was filled with cash. As soon as we finished dinner we jumped on their high speed train, over 300 km per hour, and reached Kaohsiung at the south end of the island in an hour and a half. Montreal – Toronto needs one of these. 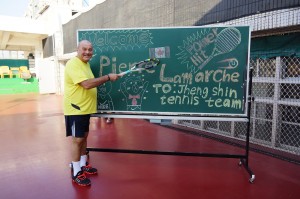 Having had a great response on the first day with my presentation, George and I decided to provide the same format to all the schools we would visit as the information shared would be similar. So, rather than talk about the content of the presentation, I will provide you with my insight on the various cities and their programs. Kaohsiung is the home city of my friend George Wang and as such many people knew him well there. We were received with a special sign which was a nice touch.

The school used three courts which were located on the roof of the school. All three courts were located independently and had different surfaces from lightening fast to slow. It was obvious that there had been communication with the children from the first day as they could not wait for the Butts Up component of the training. There was a half dozen school participating and each one was dressed in distinctive colors with their own coach being involved. This sunny day gave way to a great day for all.

Back on the train we left for Zhanghua which is located in the interior of Taiwan. The facility was outstanding with over ten courts arranged on the side of the mountain. Five sets of two courts were staggered at descending levels, making it an unbelievable setting for tennis. Of interest were the four lower courts which were clay courts. Zanghhua is a center of great tennis activity where the present Davis Cup captain, Chia yen Tsai, resides. He also privately coaches Taiwan’s top international U14 player. Present at his regrouping were the coaches of the Hope Tennis Academy from Taichung City, one of the few private schools on the island. They had a dedicated physical training coach, Andy Chen, so Taiwan is looking for alternative ways.

The final visit was back in Taipei. Here the four courts were inside the oval of a track. Unfortunately when the balls went out, getting them was a challenge. This day was the same as the three previous visits: lots of talented kids with dedicated coaches, few courts for the number of players, but kids with great fundamentals and a great value system. Overall, I was blown away with the level of play and the quality of technical skills.

Next was going to be my weekend with the top national coaches doing a SWOT analysis concerning the lack of players being able to transition from top international juniors to world class top players. As a result this was my observations from my four days of working with their players:

The above reflections were going to be important for the upcoming SWOT analysis.