A Spanish Experience! A Canadian Tennis Player in the Mecca of Red Clay Tennis: Barcelona

*** Robby Menard who has a Bachelor of Physical Education (Science) and Specialization Tennis Fitness, is Tennis Canada Level 4 coach and Club Pro 2.

Robby is the cofounder and head coach of the Académie Ménard Girardin (A.M.G.) Montréal. Coach of the year in Québec 1993, 2005, 2007 and Tennis Canada Excellence Award holder 1994-96, 2005, 2009-2010, he has been an influential leader in the last 15 years in the Québec Tennis Federation commission of coaches, and has been involved with many professional ranked players such as Simon Larose 188 ATP and Stephanie Dubois 98 WTA. Cristina Popescu top 5 ITF ranked player. *** 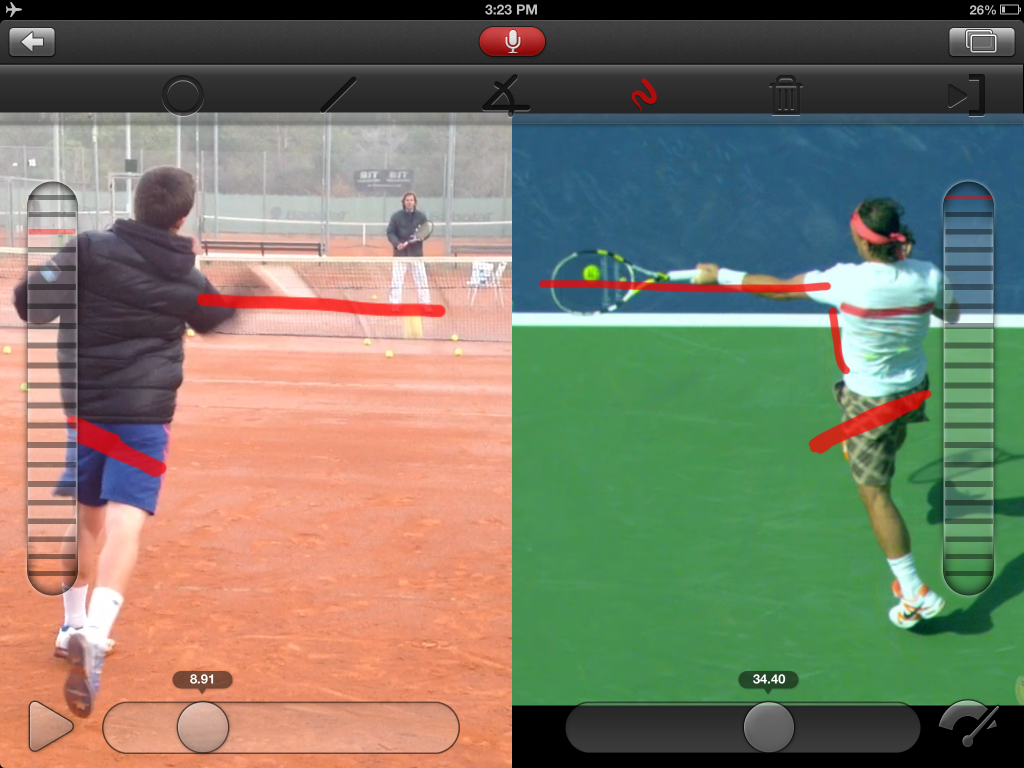 I was on court “LIVE” with Roig doing an analysis for Sid last week.

Sid Donarski is 15; he was born December 1st, 1999. He is top 5 in Canada and has multiple provincial titles. He wants to become a tennis professional. His parents are smart, educated people and are willing to make huge sacrifices for him to make his DREAM come true. In order for him to do this, his mom will teach a course at Barcelona University until June, so he can live the Barcelona clay court experience.

To put forth such an important project; you must prepare, plan and evaluate all options and most importantly, you have to go the place in question to see it and live it. I have seen many players in my time go to Spain or Florida… wherever… for a period of six months, or up to a year, to return considerably worse than their peers… I know, this ‘cause I experienced it myself at 15, when I left for Bollettieri in 1981!

Five or six academies were asked ten important questions about how they would go about training Sid. The best three answered our questions well and met all of our criteria. They were chosen and we went for a tryout of a few days.

So now…let’s go and see if they delivered!

Being his personal coach, it was up to me to head to Barcelona for seven days to experience some intense tennis and to analyze what was best for him.

Another one of my players went to train for a shorter period: three weeks. For this particular player, the well-known Sanchez-Casal Academy was a perfect choice. I had been there with Stephanie Dubois to prepare for the red clay season a few years ago, and it is great for a short stay. But this is not what we needed for Sid.

Here are the top coaches and directors:

I am the director and owner of a high performance tennis academy at Tennis 13, so why not make the best of the trip and write about it and shoot some video. I did this mostly for Sid, but also for my staff to have this important information. I wanted to share all the drills, technical tips and coaching philosophies of these very competent coaches. This was a lot of work, but very useful. Of all my 25 years of international tours, this was by far my best experience.

This Academy is 30 minutes from Barcelona in Sitges, a beautiful small town by the sea.

When I scout a tennis training session, I ask the coaches about their yearly plan, and I also pay a lot of attention to how they train, not just my players, but also their own players. The coaches in this academy were very involved in their typically Spanish training. A training that requires a lot of energy and long series. This place had very competent coaches and professionals.

Unfortunately, the level of the players was not up to par, and there were too few of them. The 2-3 player group was too small for what we needed.

The numbers of players is also perfect: 12 to 14 boys aged 14 to 18. There are also many top pros. The coaching staff there is as good as any place in the world, very personal and caring. The drills, in general, require intensity and good quality of footwork. The fact that the coaches, who are very much involved in the training, feed and also hit live balls is a very positive advantage. Coach feedback almost always prioritizes footwork.

It wouldn’t be fair to say that Spanish coaches are not GREAT technicians. Most of them are GREAT footwork technicians. Also, the best ones paid a lot of attention to the racquet and body.

Francis Roig, who is one of Nadal’s coaches, was nice enough to spend two hours with Sid and I. He was unbelievably open about everything. He shared very funny anecdotes about Rafa and Roger… But more importantly, these anecdotes happened to be extremely pertinent.

Sid and I were trying to contain ourselves! We were trying no to be impressed by the fact that he had been Nadal’s coach 12 weeks out of the year for many years. He was actually very impressive; many of his tips were DEAD ON! He gave great feedback and was also very humble. 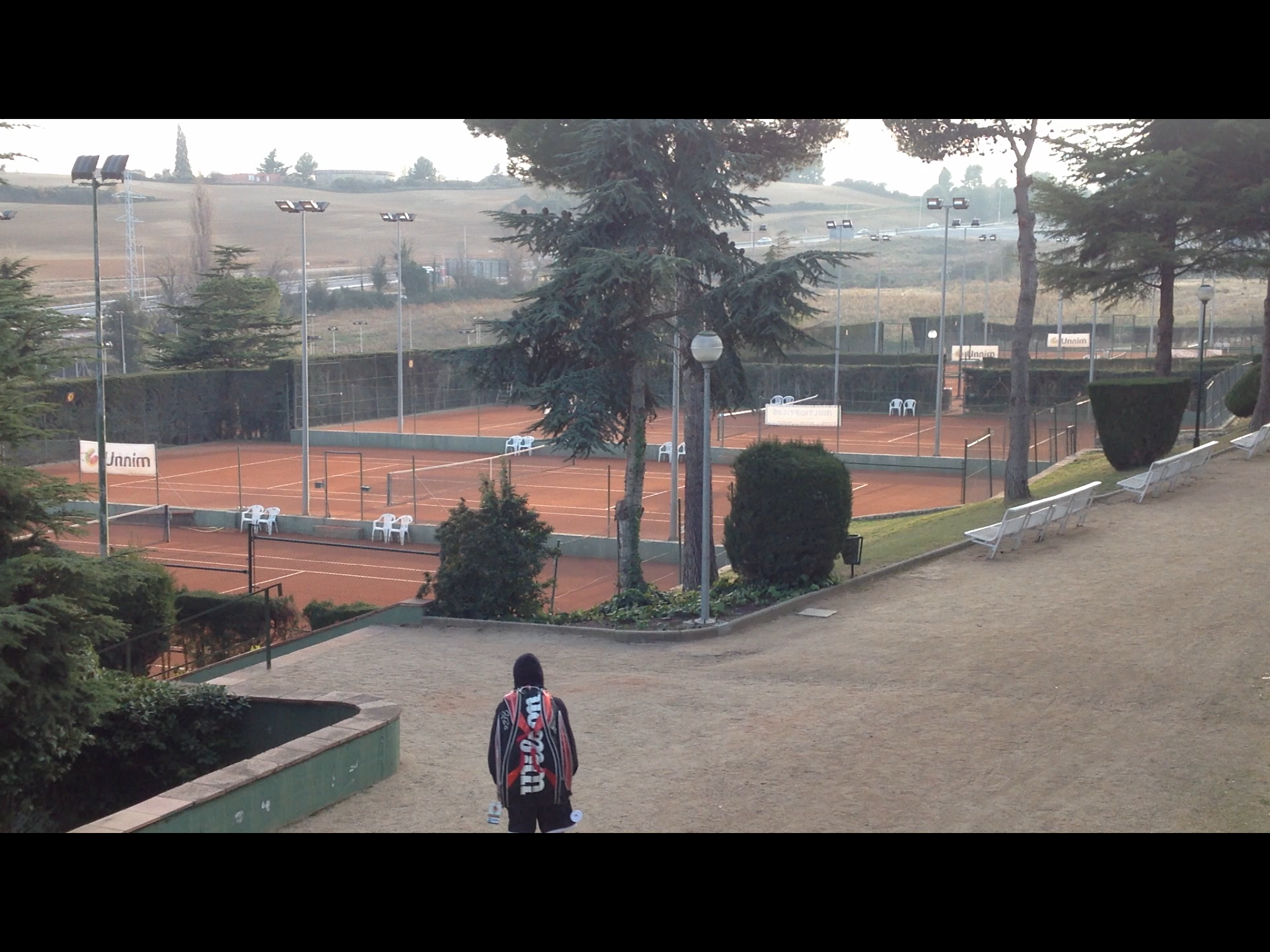 Here is Sid at the academy of his choice: 4 Slam Tennis Academy.

4 Slam Tennis Academy is situated in Bellattera, also a short 20 minute drive from Barcelona. This is another perfect tennis facility: 16 red-clay courts, four hard courts, a pool, a state of the art gym etc…

Jairo Velasco is the director, Galo Blanco and Fernando Vincente are the owner’s. The two owners are obviously on tour with Milos Raonic and Marcel Granollers, but when they are not with them they are actively present with the other athletes. It is a small academy of, at most 10-12 players, so all five coaches are actively involved with the players.

The intense attention is given only in private or semi-private. The fitness coaches are ALSO very involved on the court.

Fitness, is of a very high quality, and focused on the individual. In the morning, the athletes work out for 1.5 hours after their two hours of tennis. The quality of the fitness is excellent due to rigorous individual feedback and recuperation is managed properly. Afternoon training is targeted for the individual, but it is generally more about match play or working out a tactical situation, and after that…guess what? Yes, one more hour of fitness.

As far as the tennis is concerned, the very personalized yearly plan is followed to the letter. Emphasis on the proper technical aspects is also very important. This process is not unlike Formula One fine-tuning.

This Barcelona experience is aimed at getting a player out of his comfort zone and maximizing the learning of new skills while improving old ones. For a short stay of 5-6 months, this experience is going to be worth it as long as the athlete and staff are able to communicate well and be honest with each other.