Pierre ‘The Bear’ Lamarche: “Taiwan Diaries I, What an experience!”

One of the great gifts from tennis is the ability to travel, experience different cultures, meet new friends, awaken your senses, stimulate your thought process, overcome preconceived stereotypes, appreciate different ways of seeing things and solving problems, to make you thankful for what you have and simply to invigorate your whole being with the opportunity to live a new chapter of your life.

I was lucky enough, once again because of tennis, to live this wonderful invigorating experience in the last three weeks. I was the guest of the Taiwanese Tennis Association for a two week visit to share my experiences and views with their coaches, players and administrators. This visit was coordinated and organised by George Wang, a native Taiwanese player who was brought up and educated in Canada from grade six on. George became one of the top Canadian juniors before going to DePaul on a tennis scholarship. After graduating, George worked in Taiwan as a coach traveling with WTA players. He came back to Canada and worked at ACE Tennis for a six month period before returning to Taiwan for family reasons. George works with OAC a shipping and sport marketing firm in Taipei. He was mandated by the national association to find someone who could share different viewpoints with them to stimulate the growth of the sport in the country.

This is something I used to do in the 1990’s, visiting Japan, China, Indonesia, Denmark, Jamaica, the Ivory Coast, Algeria and Senegal sharing knowledge and experiences to stimulate the growth of the sport. Each visit was as educational for me as for my hosts. I even ended up acting as the head national coach for Tunisia for a two year period in the late 1990’s. But this trip to Taiwan was thirteen years later, and to be honest apprehension is understating the feeling that prevailed. I wanted to insure that this two week trek would provide a meaningful experience to my hosts.

The fifteen hour airplane ride was made acceptable through the business class option arranged by the federation. The trip reminded me of those wonderful [not] voyages to Australia for the Open and how thankful I am of not having to do that yearly pilgrimage. On the other hand, thank god that my stubbornness in overcoming any fear made me accept the invitation from George, forced me to do research and prepare for this wonderful opportunity.

I was mandated to prepare two coaching seminars of two days for around 60 coaches. The first one dealt with the requirements necessary for introducing players to competitive tennis, while the second one dealt more specifically with how to ensure the transition of players from top international juniors to the pro ranks. In the next few weeks I will provide an outline of my presentations and findings as they are relevant to our own Canadian situation. The rest of my trip dealt with four 8:30 to 5 pm training days in three different cities with over 350 children and numerous coaches. The experience was exhilarating as well as educational as many of my beliefs were challenged [by myself] when I experienced a system with similar results [see table 1] as our Canadian one but one which is completely different. Taiwan would die to have the resources available in Canadian tennis. The work of Tennis Canada in raising the funds for development in this country must be lauded as the overall Canadian tennis budget is at least ten times greater. Taiwan is a tennis country with hardly any clubs or tennis academies yet they have produced a #1 junior ITF male player in 2008 and a #7 junior ITF player in 2009.

You can see that overall performance is somewhat similar when you consider a quarter final performance at Wimbledon by the top ATP player in Taiwan, Yen-Hsun Lu and his being in the top 100 for over five years as well as their recent success in the boys ITF in the last five years.

The trip was without a doubt enlightening on many levels. First of all the Chinese people of Taiwan where so welcoming that it made me realize what a special country I was in. It did not matter who I dealt with, the response was the same, respectful and helpful. Everyone would benefit from experiencing the social interaction of this country.

In the next few weeks, through studies, presentations and observations I will share with you some of my deductions. Hopefully they can be insightful and even assist in helping us find a more efficient way for our well funded Canadian system. 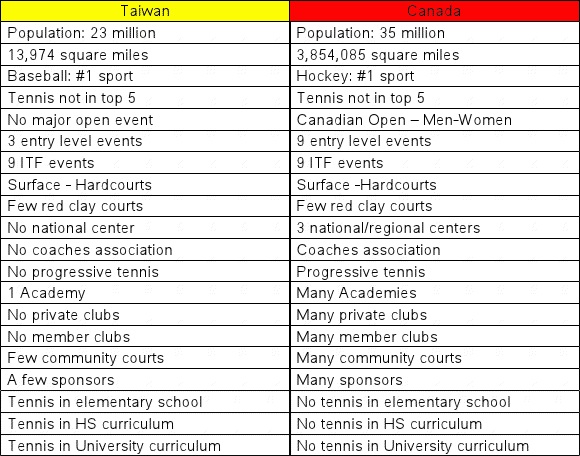