Pierre Lamarche: “Open Letter to National and Provincial Presidents and Their Boards”

I ask you, as someone who is passionate for Canadian tennis to please have an open mind as you read the next series of editorials that I will write on our present Canadian tennis system. The game in this country is presently in a healthy situation from a public perception due to the results of a few individuals who have been assisted greatly by Tennis Canada in their personal development. To assume that their success is due to the present system is erroneous. Where we develop our players or how is not important, what is, is that we foster a system which will create many more. This cannot be accomplished without the synergy created by the proper relationship with the sector responsible for developing the players [clubs, academies, coaches]. That synergy must be created by the public sector which should help the deserving players into the transition to future independence as professionals. Nobody owns the players and we are all responsible for developing them. The present emphasis on player ownership to justify the National Center policies simply goes against what is correct and will eventually be seen for what it is: a divisive, short sighted, self justifying initiative by well meaning misguided individuals.

I have been a major outspoken opponent of the present Tennis Canada development system which is based on the premise that players can only be developed at the National Centers by national coaches. The major reason I am against it is that I have lived this detrimental exercise once before. In the late 1980’s, four present Tennis Canada Hall of Fame members joined together to start the All-Canadian Academy in London, Ontario. Ken Sinclair, Harry Fauquier, Lorne Main and myself invested in developing a Canadian option a la “Nick Bollettieri”. The Academy was successful, bringing over 50 youngsters from across Canada, living in London while attending London high schools and training at All-Canadian. Tennis Canada responded to the success of the Academy by creating four major regional training centers which were subsidised. These centers also recruited All-Canadian players and this led to the demise of the program and the club. Major financial hardships resulted for the investors, coaches and staff of the club and Academy. This was the simple result of the public sector competing with the private sector using public sector funds … please tell me you see that this could be a problem.

Much furor arose from these National Center policies, so much so that another Hall of Fame member, the Honourable Francois Godbout, president of Tennis Canada flew to London to meet with our group and discuss these negative regional training center policies. The result was the eventual dismantling of the regional centers, including the program at York University in Toronto. But as a result of the competition, All-Canadian had to sell their club in London and bid to operate a program at the National Center at York University. All-Canadian [now ACE Tennis] operated a private sector company program there for many years, paid going rates for the facilities and was open to everyone. Many national level players opted to train there [Simpson, Kelesi, Nestor, Hy, Jeyaseelan, all Hall of Fame members or candidates] while others like Lareau, Rusedski, Sznajder, Laurendeau, Michibata, Connell [four more Hall of Fame members] trained in their own facilities with their own coaches. No one was discriminated when touring selections or team selections were made. This hybrid of the private and public sector created a system that was cost efficient and provided opportunities to all based on performance and most importantly produced the best results in Canadian tennis history.

The old saying “history repeats itself” applies in tennis as well. For political and financial reasons the concept of a National Center strategy was reintroduced ten years ago. Of course this system was justified by those employed by it as it provides them solid employment opportunities. The development of this strategy was justified on the perceived success of other national associations venturing in the field of player development through operating their own National Center program. A more thorough look will now show that many of these initiatives have been seen for what they are, an arrogant belief that the public sector programs and coaches [who mostly come from the private sector] are better than the private ones. As a result many of these programs have been scaled down or dismantled. The concept of a National Center is good as long as it is used to assist in the development of players, coaches and the system but not in the destruction of the feeder system.

In these articles I will show the pitfalls of the present system and the possible solutions to make our Canadian game better for all. We do not require wholehearted changes, but adjustments, which can only be brought along by the open-minded approach of all those who can effect such change…YOU.

Next week I will start with the flaws of the system. Please read with an open mind, pass on to your board and let’s try building a better system for all of us who love tennis and Canada. 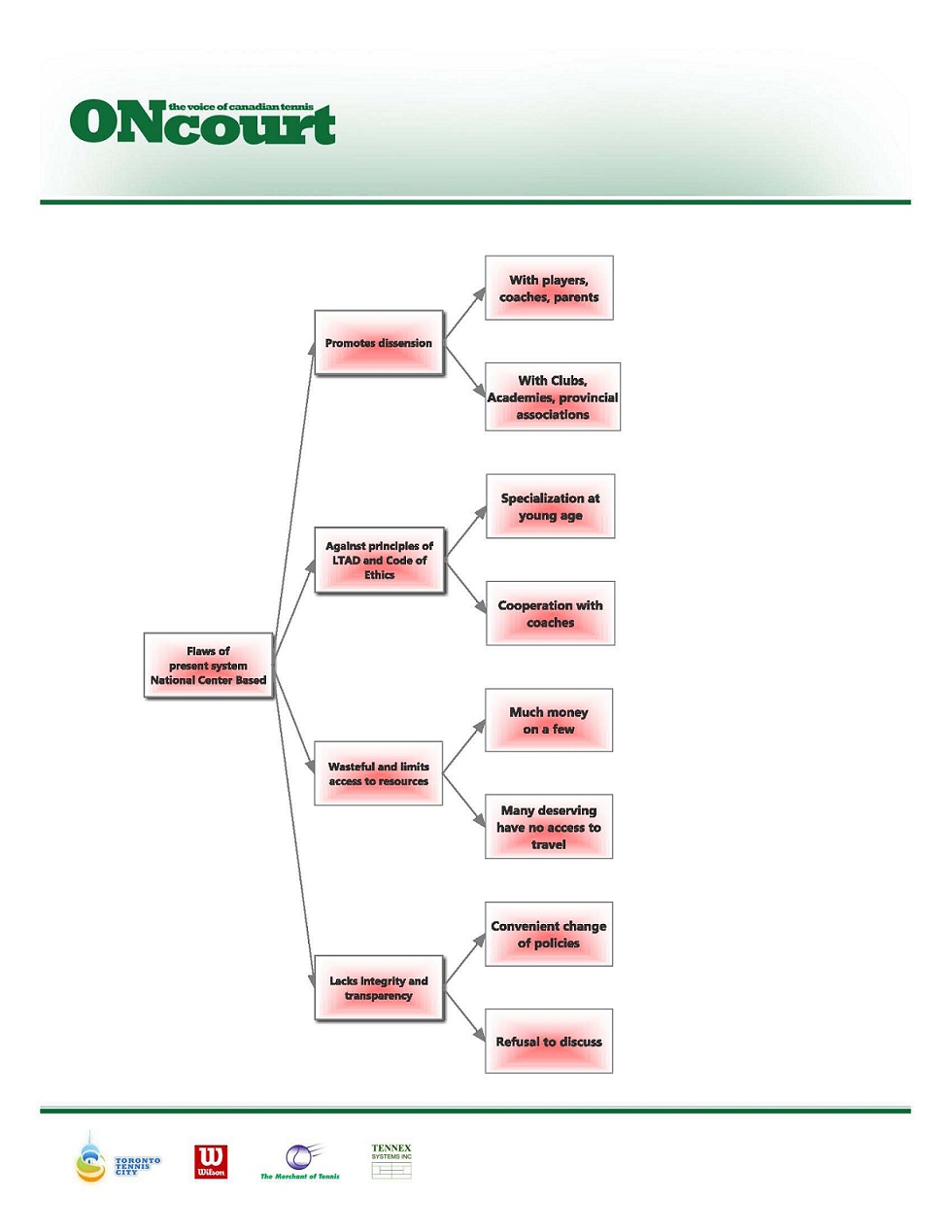