Going to College or Turning Pro? Making an Informed Decision!

In this picture: John Isner, graduate of University of Georgia

An FAQ prepared by: The USTA National Collegiate Varsity Committee

“It’s all about your work ethic, talent, and the right timetable!”

One of the most important, and often difficult, decisions that top ranked junior tennis players have to make (in consultation with their parents and coaches) is whether to go to college or whether to “turn pro.”

What follows is real data that will assist these players and their support teams while pondering the future and enable them together to make informed decisions … information addressing financial, personal, educational, and professional development perspectives that should be considered when making the very important decision as to whether the young athlete should choose to attend college or turn professional. The following questions are posed and answered:

Patrick McEnroe, General Manager of USTA Player Development, has said that “Ninety-nine percent of junior players should aspire to play collegiate varsity tennis. Only the truly exceptional should be planning to proceed directly from the ranks of junior tennis to the world of professional tennis.”

The USTA’s player development pathway now proceeds from junior tennis, to collegiate tennis, and beyond. 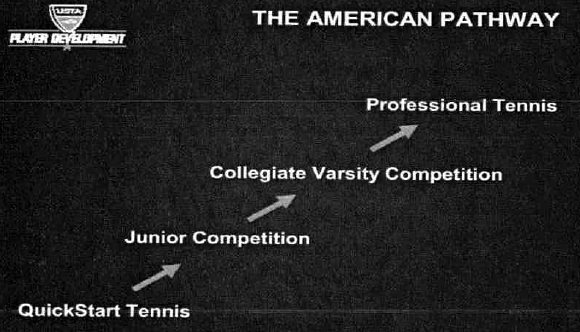 The USTA is supporting college players who demonstrate the talent, desire, and work ethic to be successful pros – through a series of programs that include summer teams, pro tour transition camps, training at the Boca Raton, Carson, and New York facilities, sponsorship of the ITA National Indoor Championships at the Billie Jean King National Tennis Center, sport science/strength & conditioning resources, and much more!

(1) The Monetary Value of a College Tennis Scholarship

See Appendix A for specific breakdown and a detailed explanation.

(b) FYI, probably only 30 – 50 major universities in the country have large athletic budgets. In considering these numbers please know that “mid-major schools” have a much more restricted travel/equipment budget.

Note: No costs for equipment and clothes are included as most top players receive these from clothing and raquet manufacturers.

(3) What you can make as professional tennis player at the progressive tournament levels?

There are apparently misconceptions as to how much money a young professional tennis player will make competing on the tour, especially pertaining to the early entry level professional events.

See Appendix C for a listing of the range of prize money and points to be earned within the progression of professional tennis tournaments.

In 2009, you would have to have been ranked 164 in the world on the ATP Tour (Nicholas Mahut, who made $144,290) to simply break even from prize money alone playing men’s professional tennis at the highest, most competitive, level.

In 2009, you would have to have been ranked 119 in the world on the WTA Tour (Pauline Parmentier, who made $142,034) to simply break even from prize money alone playing women’s professional tennis at the highest, most competitive, level.

Note: It is important to recognize that other potential revenue sources do exist for these players (e.g., endorsements, sponsor appearances, exhibitions, money tournaments, club tennis matches, etc). In creating this document we recognize that many players do make a good percentage of their income from these types of events (not just professional prize money). We have no quantified objective data, however, to report in any systematic way in this regard.

(6) The average age of tour professionals

There are apparently misconceptions as to how old the average professional tour tennis players actually are.

See Appendix E for both ATP and WTA Tours, broken down through the top 500.

(a) Studies have shown that an average professional tennis lifespan is approximately seven (7) years regardless of the starting age; for example, while many young girls are interested in turning pro, they might wish to note the amazing success that Samantha Stosur is having at the age of 29 years old.

(b) A study by USTA Player Development Staff discovered that successful pros do not skip steps in the player development progression [“unless they are good enough” – i.e., meaning that they win tournaments quickly: a good example is John Isner who played one Futures event (Won it) then played one Challenger (won it) and then made the final of the Washington, D.C. Legg-Mason ATP tour event.] In the words of Jay Berger (USTA Player Development Head of Men’s Tennis) … “You have to dominate at each level before you progress to the next level”

(c) Studies have shown that it takes an average of three (3) to four (4) years to break in to the Top 100 once joining the professional tour for those players who do reach that level.

In playing college tennis you learn to win and increase your much needed highly competitive match count; the best college players are winning c. 30 college matches per year (losing only c. 10). Their winning percentages are usually greater than 70 percent. In fact, the very highest ranked collegiate players might only lose a handful of matches in a given season.

As will be addressed at the end of this document, please recognize that the top collegiate players still play 5-8 Futures/Challengers/10 K’s, etc. during the Summer and Fall as well.

The two Campbell/ITA “College Players of the Year” recipients for 2010 definitely built up their confidence and match count throughout the college season: this performance level then carried directly into the professional arena the next summer. Their collegiate records were as follow: Robert Farah: 38-6; Irina Falconi: 40-3.

Many peak performance experts have noted that if you are consistently getting “beat up” your confidence suffers; and, confidence is one of the greatest reasons for successful performance!

IMPORTANT NOTE: Please know that there are tennis experts who have suggested that it would be a big mistake to turn pro, and not go to college, unless you are already capable of truly competing with the top 100 players inthe world!

It would appear that in comtemplating and planning a career as a professional tour tennis player it is important to remember:

“It’s all about your work ethic, talent, and the right timetable!”