It is never healthy to make a big deal over little Jenny beating little Maria. Parents, who get caught up in the status of “who beats who”, can easily infect their children as well. Far too many parents have given their kids complexes about playing certain other children.

The attitude is to improve constantly. Comparison to others is a poor gauge for improvement in the development stages.

#2 It should be about the child’s journey, not the parent’s journey:

If parents become too emotionally invested in their child’s tennis, they start to live vicariously through them. One telling sign is when the parent says, “We won the tournament on the weekend”.

The most effective parents don’t attend every practice and competition. They explore what their kids are going through with open conversation. They support them win or lose and don’t attach their status to their child’s success. They don’t project the adult pressures of their needs being met through their child’s tennis.

#3 In Practice, what they Do is always more Important than who they are with:

Parents may get caught up in the fallacy that their child always has to be in groups with better players. Firstly, it has to be seen that this attitude can kill any group programs a facility sets up. What if the other ‘better’ players in the group have the same attitude?

There are benefits being in the top, middle, and bottom of training groups, just like there are benefits in playing stronger, same, and weaker level players. All these experiences are important in development stages. All too often players, who only train with better players and ‘play up’ in tournaments, only learn how to ‘lose well’ (you were really keeping up with her, too bad you lost 6-2, 6-0). Developing great training habits and improving skills gets people further than who they train with.

The most effective parents respect their child’s coach, communicate with them clearly, and avoid ‘lobbying’ their coach to place them in certain groups.

Winning in the development stages does not ensure success in the future. The goals set, and the activities done to accomplish them, are what is really important.

Too many parents become content with the status and accolades, when their child is winning at younger ages (and assume it would just continue). If they don’t train solid fundamentals, it could detract from their future success.

The most effective parents help their children to take the focus off winning and place it on the process of setting and accomplishing improvement goals. They reinforce what the coaches emphasize.

The most effective parents don’t let poor behavior or sloppy training habits slide just because the child wins. Use tennis to make a great human being first, a tennis player second. Tennis trophies will only come for so long, but character lasts a lifetime. They use tennis to develop their child’s character and leave the tennis to the coaches.

Values are critical to success in life. For example, the attitude of independence can be fostered when the parent does not interact with the child during practice (e.g. trying to remind them of technical issues, etc.). A child who constantly looks up at their parents after every shot is not on a good track. 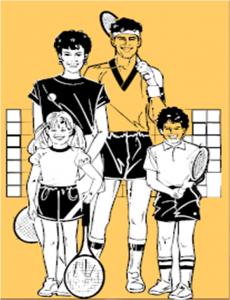 If the ROI expected is in the form of wins, ranking, success, or money, the parent’s motives are misplaced.

If the ROI expected is for their child to become a mature adult and be able to use tennis as a school for life, then their approach is the correct one.”

#7 Remember, this whole thing is about Kids Playing with a Ball:

The most effective tennis parents, “chill out”. Tennis is a great positive experience if the right environment is created with both enjoyment and improvement.