Tennis is classified as a ‘Perceptual motor skill’ by motor learning experts. In other words, successfully applying technique is based on seeing what is going on (perceptual) and making a decision to adjust movements (motor skills) accordingly. This is in contrast to sports that used ‘closed skills’ that don’t require skills to be adapted to the situation (e.g. gymnastics or diving). In closed skill sports, moving correctly is the only priority.

In an Open skill sport like tennis, a player hitting a shot goes through a 4 step process (called an ‘Information processing’ process):

After the first step of perception, the next critical step is decision-making.

All this to say that stroking a ball is not just about mimicking a swing pattern but adapting an action to the situation at hand. For example, a player doesn’t just use their ‘forehand groundstroke’ in a match but their neutral forehand crosscourt from the baseline, their forcing forehand down-the-line, their counter forehand passing shot, their running forehand wide, and a host of others.

Each forehand groundstroke (backhand groundstroke, volley, etc.) requires the player to see the characteristics of the ball received, the location of the opponent, and make a decision on the tactic and technique to perform. Without decision-making, tennis is impossible to play.

The fact is, every player at every level will make decisions. Whether they make good ones or not is another matter. Since tennis requires hundreds of decisions in a match, training decision-making can provide practical and obvious results.

In the Intention stage, the player basically ‘makes up their mind’ as to what shot they are going to hit. Sometimes, it is possible to choose this intention ahead of time (e.g. “If the serve comes to my FH, I am going to hit crosscourt”).

In tennis, the geometry of the court, the characteristics of the ball and the nature of the game, create certain shots that are considered ‘high percentage’. For example, it is well known that when receiving a crosscourt, groundstroke in a rally, returning the ball crosscourt will minimize errors since there is more court space, the net is lower in the centre, and changing the direction of the ball is riskier. This means that players should be trained to make these high percentage plays with clear intention thus minimizing errors and winning by giving away fewer points.

The simple definition of ‘high percentage’ I use with players is “If you received that ball 10 times, how many of that shot you intended to hit would you have made?” The player’s answer usually tells a coach a lot about their intention and decision-making.

Research has shown that having a physical target increases success 200-300%. Teaching aids such as markers for direction and distance, a rope strung across the court above the net for height and other target equipment are invaluable to train a player’s intention. Companies like http://www.oncourtoffcourt.com specialize in such teaching aids.

Intention training simply means a player should have a clear idea of what they want to do to the ball. It may sound elementary, however, decades of teaching experience has shown me how few players actually hit with clear intention. It takes lots of training to develop the skill.

Intention is good, but it needs to upgrade to selecting the best option between multiple choices. This is called ‘Differentiation’. Tennis requires ‘automatic differentiation’, since there are often a number of shot possibilities.

With differentiation comes a number of possible decision-making errors. It is important for a coach to be familiar with these, since this is where the majority of decision-making corrections will be made. These were identified by top international coach Louis Cayer in the early 90’s. 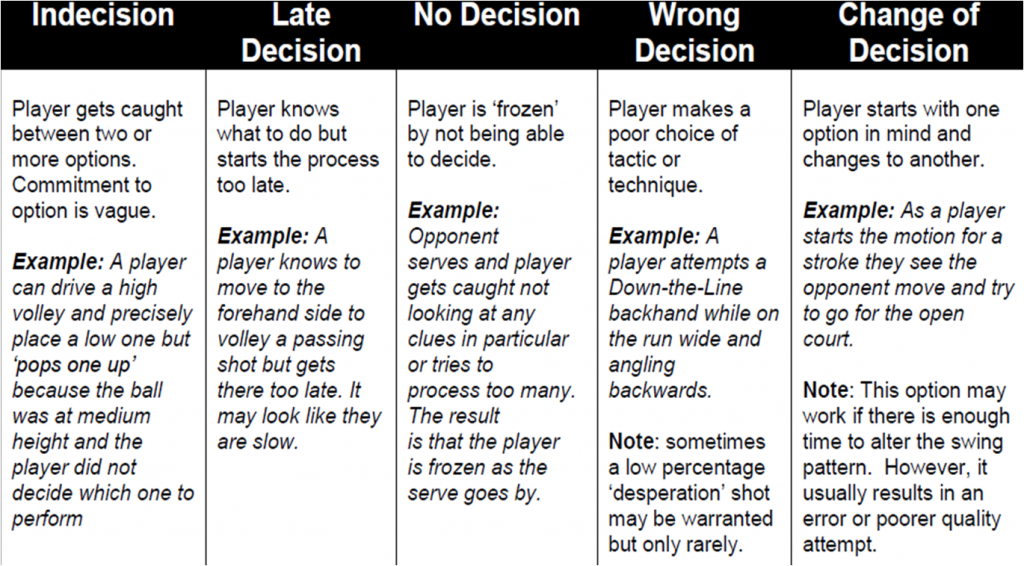 Tennis is a game of errors. There is no such thing as a ‘perfect’ performance, only degrees of ‘errorlessness’. To improve, it is important to track down the source of errors.

For example, a player in a baseline rally hits a down-the-line forehand wide. It would be all too easy to consider the error as solely technical, since that’s what’s seen on the surface. However, if we could ‘get into the player’s head’, we may have observed that they intended to hit the ball crosscourt, but on seeing the opponent move, changed their mind. In this scenario, the technical error was the angle of the racquet at impact, but the source was a faulty decision. Changing ones mind can cause increased muscle tension as the player mentally and physically tries to stop what they are doing and make a ‘U’ turn. Just a slight tension or hesitation can lead to an incorrect racquet angle.

In my experience, I have found that faulty decision-making is the root of 40-60% of all errors. The way a coach structures training will set the stage for long-term success. Using the example introduced above, practicing the down-the-line drive over and over (the most common solution), would not help. The player, given the same situation, would make the same error since the fault lies in a cognitive process.

Training decision-making frees up player’s mental resources to focus on successful performance. This kind of training is especially important in tennis since no coaching is allowed in most competitions. Tennis players must be trained to be independent and self-sufficient rather than coach-dependent.

This is one of the most useful tactical decision-making tools. A ‘phase’ is the relationship between the challenge of the ball received and the risk taken to send it back. By making a good decision, the player will not over-risk and give away errors. On the other hand, the player will challenge the opponent as much as the situation allows. The challenge can be through the speed of the ball (hitting harder), the placement, or the time (e.g. taking the ball early).

For example, this is what makes Federer such a great player. He doesn’t have as strong shots as some of the other players, however, he has an uncanny ability to make the right shot and the right time. A decision-making genius.

There are 5 Phases of Play:

Rally: This is a ‘neutral exchange’. When receiving a medium challenge shot, a player should send a medium risk shot back to neutralize the opponent and not allow them to take charge. Training this neutral phase is critical to master baseline exchanges and construct points well.

Force: This is a shot that has a medium to slightly weaker challenge. The idea is not to put the ball away but gain the advantage by taking slightly more risk to challenge the opponent.

Attack: This is when a weaker, higher, or shorter ball is received and more risk is taken to respond. The goal is to outright win the point with power or placement.

Defend: This is a shot that is very challenging to receive. To avoid errors and keep the ball in play, a low-risk shot is returned (e.g. a lob).

Counter: This is when a challenging shot is received but rather than just getting it in play, the idea is to ‘turn the tables’ and try to gain advantage.

For starter players, the neutral and defense phases are the most prevalent. These are the priorities in training, to keep the ball in play. As a player improves, they learn to challenge the opponent by forcing and attacking and upgrading defense against more challenges. Advanced players learn to counter and challenge players through high power attacks. Interestingly, in professional matches, countering is the dominant phase.

Decision-making is a cognitive process. It occurs in a player’s mind. So how does a coach enter and train a player’s mental process? Getting a player to call the cues that trigger appropriate decisions provides a tool to train clear and well timed decisions.

For example, training moving from a rally to gaining advantage through forcing could be done by having the player call ‘Force’ or ‘Now’ when they identify the opportunity to add power or placement.

Decision-making is a critical skill to include in every level of training. Tennis success depends on making decisions that are tactically sound. This develops players rather than just strokers. Decision-making is a trainable skill (not just a magical innate ability). Using Cue words gives the coach the ability to train decisions effectively and systematically.

To view more ACE COACH  videos from the new series about learning tennis as an ‘Open Skill’, please visit the “Game” section of our website.