His comments are often taken as critical by those who feel targeted by his questions. His background as a player, coach, and leader [see background] in the sport and coaching industry warrants that his views, which are shared by many others, be given due process by anyone [or organization] who really wants to help Canadian Tennis achieve the proper national status it deserves in the sport community.

His ONcourt series of editorials specifically provides thoughts for reflection on how to make Canada a tennis superpower.***

Note from The Bear: Unfortunately, due to time demands it was not possible for me to research and compile a list of everyone that participated in this momentous event. A lot of people contributed to make this the most memorable weekend of Canadian tennis. I apologize for these omissions and hope that everyone will overlook my memory lapses. But this is how I remember it…

What I remember the most about the time leading up to the tie was going outside of the PNE Agrodome, in a foggy, rainy day looking at the mountains and thinking of my friend Graeme Campbell. Graeme was a great actor, a tennis fanatic who had been filming in Australia just before the time Dan and I were there. He returned to Canada, fell sick, died on the day we came back from Australia and I never got to say goodbye. The events of the week pushed my coming to terms with his death till that moment standing outside looking at the mountains. We had discussed this tie on quite a few occasions. I dedicated our performance to him; I wore his scarf around my wrist for the whole tie and finally being Pierre, I asked him to make sure we would not get embarrassed. Thank you Graeme.

Grant was ready for his home coming. He spanked the #15 player in the world 7-6, 6-4, 6-4 to send the Agrodome fans on an unexpected joyful ride. His execution of “The Horse” Gustafson was impeccable. This certainly was one of Grant’s greatest matches given the opponent, the setting and the meaning of the match. Grant was always money in the bank. He and his sidekick David Cox were always so professional in their approach to every match.

Now it was time for the kid. Our team was buzzing. At the worst we were getting out of the first night tied with Sweden at 1 all with the doubles coming up. Anything was possible. Our team philosophy had always been, we split on the first day, win the doubles and close on Sunday. I hardly had time to calm down and be ready for Daniel, that he was on. With Dr Cox we had designed a list of cue words for service locations and return intentions. While the crowd was clapping after every point as they do in Davis Cup, I could slip a suggestion to Daniel which made it easier for him to deal with the unreal situation, #230 ATP versus #1 ATP. The reasons I felt Daniel had a chance against Edberg were:

Daniel was in the match from the start, lost the first 6-4 but did not feel overwhelmed. He nailed some returns, struggled with his first serve but pulled out the second 6-3. His serve disappeared in the 3rd and he went down 6-1. I really believed then Daniel could win if he could get his serve going. So instead of going to the locker room for our 15 minute break, we went back on court and served a basket of balls. I think this was only possible because Daniel was in a daze. If not, he would have given me one of his patented: “Shut up, Lamarche”. The serve under control, his returns booming, the pressure mounted on Edberg who lost the fourth 6-3, and who got broken early in the fifth. Up two breaks Daniel could not close out the match on his first service game. He did on his next try for the most unbelievable victory of his career, David beating Goliath.

The first thought after the match was: “We have a chance to beat Sweden”, process, process, process. I knew Louis would have our doubles team ready, he always did. Grant was fine having had enough time to recover. Before the doubles, we had the traditional introduction of the teams and the players. An incident occurred which for the first time gave me a negative vibe in the tie. As the Canadian team was announced, Grant was introduced before Daniel and right then I knew there was going to be a problem. This was Grant’s team, he carried us there, it was his town and he won his match the previous night. This should have been his moment, it was not, it became Daniel’s who was introduced last to a thunderous reception. In retrospect it was my fault for not insuring the right order although I was not consulted. The slight did upset Grant and provided me with a feeling which worried me.

We were up a set and up in the 2nd, but I never felt like we were in control. I just wanted us to keep putting the nails in the coffin and come away with one of the great victories in Canadian sport history. What happened was surreal. Anders Jarryd, a Grand Slam doubles champion took over the match. On the changeover he got up in Edberg’s face and started yelling at him. I am not sure what was said but our momentum was suddenly reversed. As quickly as we were going towards victory, we lost the doubles in four sets. Jarryd’s intervention had stimulated the Swedes and changed our focus, process, process, process.

Sunday was going to be a difficult day. Grant was coming off that emotional doubles lost and was facing the #1 player in the world who suddenly found a way of redeeming himself. Edberg won in three but not before Grant pushed him to a third set tie-braker.

Meanwhile, another drama had unfolded. Daniel woke up on Sunday morning unable to practice due to a bad blood blister deep underneath the ball of his foot. He basically could not step on his foot so we proceeded with preparing Pridham. I spoke with the doctor and discussed options. It was established that we could drain the blood, freeze the foot and that Daniel could play. We insured there was no chance of a permanent injury, discussed it with the coaching support team and I took it to Daniel. I told him that based on looking at everything, we felt he was our best chance for a win. I explained the procedure and he decided he was up to it.

As soon as the Connell-Edberg match was over, I rushed to the locker room to meet the doctor and Daniel. We needed to do the injection as close as possible to the start of the match for it to last as long as possible into the match. We all knew it would be painful afterwards. Our team Doctor arrived with the syringe to remove the blood and I must tell you it looked like a drill. Daniel saw it, his eyes rolled, he went out for a second, blood was taken out, the foot frozen and Ken Farrar [US Open referee] the referee for the tie came in the locker room telling us we were late. Daniel got up, walked out on the court and proceeded to give this country the most inspirational defeat in sports history. 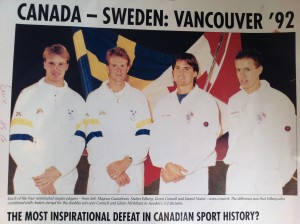 Despite being up two sets to one and having Gustafson on the ropes on the last two sets, Daniel was on the short end of a 6-4,2-6,3-6, 7-5, 6-4 deciding match. The freezing had worn off at the beginning of the fifth set, yet Daniel had become Canada’s new sporting hero.

Tom Tebbutt of the Globe said: “The response to the Nestor-Gustafson cliff-hanger, broadcast wire to wire by TSN and RDS was something the Canadian tennis community could have ever imagined. Having a Canadian player- and a young, talented and courageous one at that – front and centre trying to lift his country to an almost miraculous victory over one of the superpowers of tennis, was too compelling to ignore for millions of his countrymen.”

Unfortunately, we lost but I will always remember the pride of being part of that team which almost accomplished the impossible and who sent a message to the rest of the World….we are real.