His comments are often taken as critical by those who feel targeted by his questions. His background as a player, coach, and leader [see background] in the sport and coaching industry warrants that his views, which are shared by many others, be given due process by anyone [or organization] who really wants to help Canadian Tennis achieve the proper national status it deserves in the sport community.

His ONcourt series of editorials specifically provides thoughts for reflection on how to make Canada a tennis superpower.***

Note from The Bear: Unfortunately, due to time demands it was not possible for me to research and compile a list of everyone that participated in this momentous event. A lot of people contributed to make this the most memorable weekend of Canadian tennis. I apologize for these omissions and hope that everyone will overlook my memory lapses. But this is how I remember it…

On a cold evening in September of 1990, on an ice like surface at York University, we fulfilled our dream and our objective of bringing Canada’s Davis Cup Team for the first time ever to the World Group. Majestic Grant Connell took out Dutch star Mark Koevermans of Holland in the fifth and deciding match on a superbly doctored court [so fast you could see your reflection on the court].

Our ascension in the World Group was short lived playing Spain in La Manga. Spain had Brugera [French Open Champion], Casal and Sanchez [multi grand slam doubles winners]. Wostenholme and Sznajder both went four sets in first day losses. Sznajder registered a win over top 5 Sanchez in the dead reverse rubber. A 4-1 loss was our first experience in the lofty world group. That September we played a team for the first time, under my guidance, where we were favourites. We were lucky to escape with a 3-2 win against Cuba, once again thanks to the leadership of Connell. For the second year in a row we were going to the World Group.

The next day, the planning for our second World Group appearance began. Our wish list was a home tie against anybody, as any of the eight seeded teams were awesome. My arguments to host the tie in Toronto in February on our favourite doctored, slanted for lefties, Center Court at York, were pushed aside [nobody believed in the chances of global warming making the court playable]. Vancouver, our favourite Davis Cup City was selected to host the event if played in Canada. Vancouver is a great tennis town: lots of history, lots of fan support, the media is the best – it really makes you feel like you have home court advantage. When the draw in London, England gave us Sweden with its #1 ATP player Stefan Edberg, we  got our wish of a home tie, but against one of the world’s best [Davis Cup Champions in 1994,97,98].

Once we knew the opponent and the location, we stated planning for the long-shot victory. Our assets were Connell in singles and the world class team of Connell and Michibata in doubles. We had four or five options for who could play the #2 singles spot on the fast service we would select: Chris Pridham, who knew Edberg and practiced with him, present Davis Cup captain Martin Laurendeau, perennial Davis Cup stalwart Andrew Sznajder and a young gifted leftie rookie, Daniel Nestor. Wostenholme was not considered due to the surface. 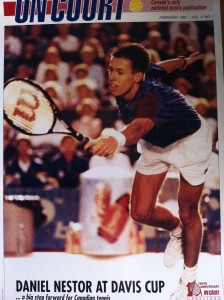 The inclusion of Nestor in the selection process was met with approximately the same enthusiasm as the proposal to host the tie in Toronto in the snow. But he became part of the evaluation process in the fall as we discovered that Edberg had suffered six defeats the previous year against lefties on indoor surfaces. The Czech Petr Korda, with a corky serve like Daniel’s, had beaten, him twice. For someone who saw few options in beating a team which had four players on its team that had attained top ten world ATP ranking, any coincidence was seen as a sign worth following [OK not the most scientific]. As well, my most trusted advisor, Harry Fauquier, a former Canadian great and  in charge of the doctoring of the surfaces we used at home, agreed with me that Nestor should definitely be considered as an alternative. Robert Bettauer, my boss as the Director of Development, was supportive but certainly worried about the possible fallouts from such a decision.

As the fall progressed, Nestor’s climb in the ranking [in the 200’s] continued. Meanwhile, our other players stagnated in the 100’s. In January 1992 the early season ATP Down Under campaign became paramount in that decision. The Canadian team had been in New Zealand and Australia for a few weeks when I arrived down under with Daniel for the Australian Open. Grant Connell, the unofficial leader of the team, discussed the options with me and said Nestor certainly should be seen as an option based on what had transpired in the first weeks of the 1992 ATP tour. Daniel, 19 years old, proceeded to have a great qualifying tournament as he made it to the main draw.  His play was very encouraging and his transition to the big time was smooth. Beside my role as Davis Cup captain, I was Daniel’s personal coach so we stayed together [not much fun for either of us, as he is always complaining, a light sleeper and I snore]. We spent a lot of time together [great memories of him complaining at a Thai restaurant where he had to take off his shoes and sit on the ground]. He did not know that I was seriously considering him for the #2 spot in the upcoming tie. We went and saw Edberg and Gustafson play some matches and discussed strengths and weaknesses. Finally, one night I asked him how he would handle it if he ended up playing in the tie. His answer convinced me he was the player we needed: “That Gustafson is a real horse, he scares me”. No mention about being scared of playing the #1 player in the world and the eventual 1992 Australian Finalist Stefan Edberg. That is when I became convinced that he could be our #2 player.