There is tons of information out there regarding how to play tennis. The bulk of it is technical in nature, information about how to hit a ball. The challenge is that success in tennis is every bit as much about when to hit a ball as how to hit it. In other words, it’s about time (doing the right thing at the right time).

The reason for this is that tennis is classified an open-skill sport by motor learning researchers — a sport in which players must constantly adapt their movements to an ever-changing situation on the court. On every shot, a player must decide where to move, what shot to hit, and where to recover while awaiting the opponent’s next shot. The player’s movement and stroke execution must be continually adapted to the situation at hand.

Contrast this to a closed-skill sport (such as diving, figure skating, gymnastics, etc.). Here the objective is to execute pre-determined movements in a precise and repeatable way, based on an idealized model or form. In closed-skill sports, performing the movement correctly is how athletes gather points and win medals. Tennis matches, by contrast, are not won by amassing points from judges who sit at courtside, evaluating the form of each stroke. 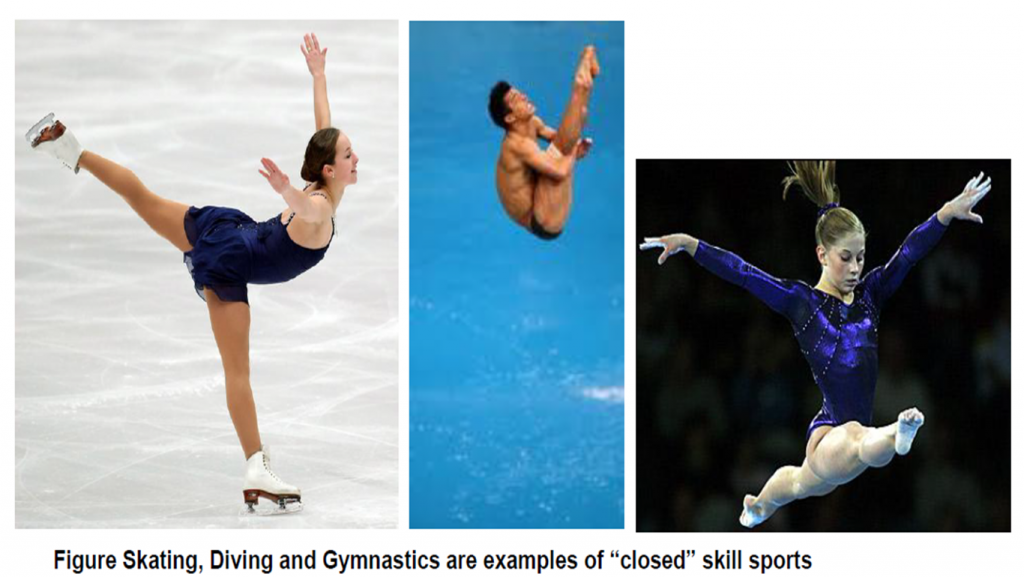 In the 1980’s, then Canadian Head National Coach Louis Cayer systemized a method of instruction based on the principles of open skill development. The approach was so effective that Tennis Canada adopted it as the official national coaching methodology. It’s principles have now also been adopted by the International Tennis Federation and numerous countries.

Cayer applied the research that revealed that, on every shot, a player goes through 4 steps of an information processing process (whether they are a starter player or a tournament pro). Closed skills in contrast. start with execution step: 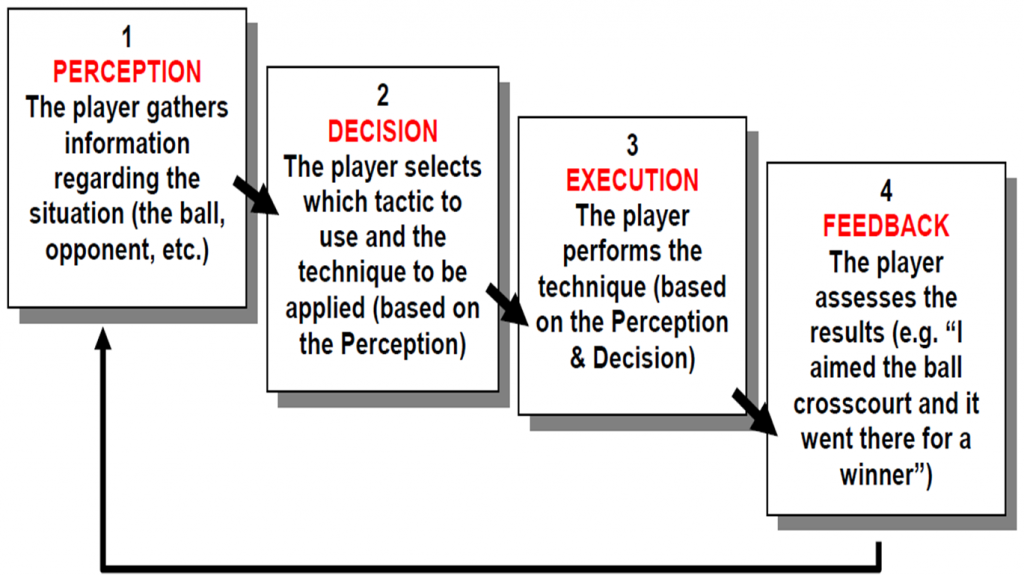 A Problem with Traditional Tennis Teaching?

For various reasons, tennis coaching evolved over the years into coaching tennis as a closed skill by making everything about performing specific technical movements in a prescribed form.

For example, when looking at the ‘forehand groundstroke’, a standard model will appear in the minds of most coaches and players. In recent years the content of the model has been changed to reflect the modern trends of the game (e.g. Semi-open stance, loop swing, Semi-western grip, etc). This „model thinking? has even continued through the technological revolution (e.g. slow motion video of Federer’s “forehand”).

Traditional tennis coaching was based on the priority of conforming students to these models. The typical lesson consisted of a coach standing at mid-court delivering a soft feed to a student and harping about the elements of the, perfect form’. Once the model stroke was reasonably stable, the coach sent the player back into the “real world”, expecting the player to successfully use the carefully-polished stroke in a live rally or match play situation. The typical result was the stroke quickly breaking down. Why? Because the player was not taught how to adapt it to real play situations. After the breakdown, the player would return to the coach only to have the cycle repeated.

A model based methodology impedes development of open skills because it falsely conveys there is a “one size fits all” technique that is good for every situation (e.g. “The basic forehand”). However, does the same technique occur if the forehand is performed from a wide ball or a 3/4 court low ball? Is it the same for an attacking shot, or a defensive one? Is it the same when receiving a high ball or sending a sharp angle? When the „basic stroke? must be changed constantly to adapt to the situation it becomes the exception rather than the rule.

For example, in observations conducted on advanced beginners (2.0 Play Tennis Rating), the amount of time the ball was in range to perform the standard ‘model’ groundstrokes was maximum 30%. In other words, when novice players play (not drill), they are required to adapt in ways they have never been taught 70% of the time! Small wonder why many find tennis frustrating (especially after lessons).

True, many players eventually discover that stroke adaptation is critical to real world tennis. But how long does it take to achieve a reasonable degree of success? Months? Years? We now know there is a much better and much faster way.

In any open-skill sport, technique is not an end in itself as in closed-skill sports. In an open skill, the situation rules. The player must correctly perceive the tactical situation to decide on which tactic gives the best chance for success. Technique becomes only a means to execute a tactic. The player must know what they are trying to do before learning how to do it. Technique should never be divorced from tactics, no matter what the level of play.

Since every skill must go through the open skill process, it is more effective to teach a player how to play (perform tactics) by applying ‘proper technique’ rather than teaching them ‘proper technique’ first (the strokes) and then tactics later. This ‘tactics later’ approach is not learner-centred because the ‘proper technique’ must always be adapted in ways not taught, applied to situations only mentioned, with decision-making skills never trained.

Playing is all about decision-making. In my experience, 40-60% of all errors can be traced back to some decision-making deficiency. The player didn’t nail down when to do the appropriate shot. For example, a player practices a bucket load of backhands. In the match during a rally, the ball comes a little faster (or deeper, higher, wider, etc.), the player doesn’t adapt the stroke and decide what to do on time resulting in an error. The majority of coaches and players watching would chalk it down to a technical error (e.g. they hit late) but that was only an outward symptom of not seeing what was going on and doing what they needed to do at the right time. Is the solution to practice another bucket of balls hitting early, or something more?

Even with all the research and information about learning out there, the approach of giving players technical models to copy is so pervasive, I light-heartedly in our coaching education classify it as a disease for coaches called, “modelitis” . Do you suffer from a mild or severe case of modelitis? I have to admit that it is still so much a part of the coaching world I even get sucked into the mind-set occasionally.

The remedy is to remember that, since adaptation to a situation is the key distinction between open and closed skills, open skill learning must emphasize the first two steps of the process for correct performance. By including perception and decision-making to the stroke learning process, I can empower players to perform their technique in more relevant and practical ways.

Technical learning is not complete until players can improve how they read the situation and make good decisions about when to perform the technique and, just as importantly, when to not do it or adjust it. Open skill learning helps them to become smart and actually play tennis (not just stroke balls). Check out the many articles on acecoach.com to see tools and resources on how to coach this way.