When I saw the score 5-all in the fifth set, I somehow knew I had to go to Court Suzanne Lenglen to see the end of the match. There is no tie-breakers in the fifth set, and the two players would probably had once in a lifetime opportunity to make it to the quarterfinals fo the Grand Slam.

I remembered Fabio Fognini from his 2010 campaign. Playing on Court Philippe Chartier against clearly a better player – Gael Monfils, Fognini refused to lose.  Despite the partisan crowd, and the darkness (I remember turning my camera off because it was too dark to take pictures) Fognini was playing. Against a better opponent, against the crowd, and against chair referee who reused to stop the match because of darkness. And Fognini won.

This year he was playing against one of many Spaniards in the draw – Albert Montanes. 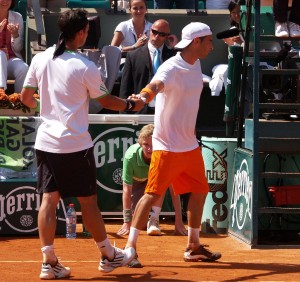 Could he repeat the same magicperformance this year? Well, the answer came about 30 minutes later. I got there at 5:6, and at 15:30 Fognini missed his first serve.  And then he made a gesture to the chair umpire that he could not walk.  It looked like a cramp, and the crowd started booing him. But Fognini refused to move showing that he simply couldn’t.

So the chair umpire had to some down, and then call the medical assistance.

Montanes was clearly frustrated, a win just two points away. He ried to stay composed.

After Fognini returned to the court, he, just like Andy Murray the day before tried to serve using just arms. And going for winners at the first opportunity.

That strategy gave Montanes 5 match points over the next few games. But he couldn’t close. Too nervous to hit a winner. Too tight to try for a drop shot.

So Fognini gave verything he could, somehow knowing that this was his lucky day, and that perhaps he might not play for the quarterfinals again. Or perhaps the sense of history – by winning he would be the first Italian player in 13 years to make it to the final 8.

And he won 11:9 in the fifth.  Montanes clearly disgusted (either with himself or with Fognini’s antics) crossed the net and came to shake his opponent hand. Almost as if we wanted to get off this court as quickly as possible.  After all he played there for almost 4 and a half hours.