If Andy Murray continues playing like he did in his 3rd round match against Michael Berrer of Germany, he might have to suffer an injury much more serious than that on Friday afternoon.

Running to another drop shot Andy twisted his ankle, then fell on the court, and had to ask for medical help. His ankle was taped  right away, but he still needed some assistance during next changeovers. And all this was happening in a match that he was in total control (after all Andy won 6:2, 6:3, 6:2) and actually ended up serving using his arms only.

And for a moment it looked as if he would be forced to retire from the match.

Murray who never reached a quarterfinals in Paris, has not lost a set so far, and if there is anyone that can surprise Nadal, Djokovic or Fererer that would be Andy. It almost happened in Rome, when if not for two double faults in the crucial moments of the final set, Murray might have ended Novak’s winning streak. Can he surprise in Paris. It all depends on the shape his ankle will be during the next match against another player from Serbia – Victor Troicki.  Whatever the outcome of that match – it will not be an easy one for sure for Murray. 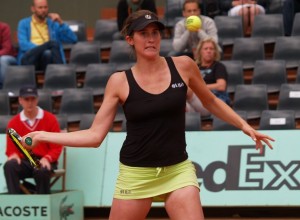 While Murray was struggling with an injury on Court Lenglen, Rafa had an relatively easy rod against Antonio Veic of Croatia. Ranked number 227 in the world Veic in his first Roland Garros tournament surprised Nikolay Davydenko in second round winning in 5 sets.  But clearly playing Rafa was too much for the young Croat. First of all, it was his 6th match, second – playing number one in the world, third – playing in one of the famous and biggest courts – Philippe Chartier. It appeared after  2-3 games, that Veic was already tired.  But despite loosing 6:1, 6:3, 6:0 you have to give him credit for trying, until the last point was played. Definitely a player who deserves respect for not quitting in a match that from the very first point he knew, he had no chance.

Same respect goes to our own Rebecca Marino. Her third round match against 209 winner Svetlana Kuznetsova could have been a disaster. First set ended up in about 17 minutes. 6:0 for Kuznetsova.  But Marino put up a fight in a second set and was going point for point until 4-all.  Then Kuznetsova broke her serve, and eventually won 6:4.

But just like Veic, in her first French Open experience, Marino earned respect, and many points that should help elevate her ranking to inside top 50.