No matter who is going to win 2011 Roland Garros, Kim Clijsters and Caroline Wozniacki made history already. Perhaps not the kind of history you want to accomplish as an athlete though. With Kim loosing on Thursday, and Wozniacki being badly outplayed 6:1, 6:3 on Friday by Daniela Hantuchova, 2011 French Open marks first Grand Slam tournament in the open era when neither number 1 nor 2 seeded players make to the third round of the tournament. Well, actually this is the first French Open in history since this happened. And that’s go back to 1925. 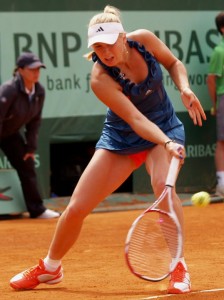 And if Kim was in control of the match against Dutch youngster Rus, and then just fell apart, Wozniacki just simply forgot to show up. From the very first game there was this lack of intensity and fighting spirit (just like we saw when Wozniacki played our Aleksandra Wozniak) even if things don’t always go the way you planned. It seemed that Wozniacki accepted the fact that this simply was not her day and didn’t even try to changed things around and give herself a chance to get back to the match.

Somewhat surprising from World number 1. What was even more surprising that at the press conference Wozniacki didn’t even seem upset about her loss. “Those things happen – she said. Hantuchova was simply better today. I am a great player, and next time you’ll see me I will be that much better” – a surprising statement from someone who still has a Grand Slam to in just to prove all the critics that she truly is number 1. 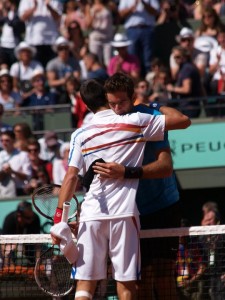 Somewhat different story in men’s singles.  And that’s because Novak Djokovic and Juan Martin Del Potro gave all they’ve had to prove who was better on Thursday night (the game was suspended due to darkness) and later on Friday. And even if they were stretched when their best was not very good at the moment, there was no doubt, that both were trying.

Djokovic put his winning streak of 39 (and actually if you include his two Davis Cup victories – 41) on the line, trying to match 1984 streak of 42 that belongs to John McEnroe (that year McEnroe lost for the first time to Ivan Lenl – in Roland Garros finals)  Del Potro who was a semifinalist here in 2009), lost to Federer in five sets) is climbing back to top ten (after wrist injury), just to prove that he really is one of the best players in the world, and 2009 US Open win wasn’t just a coincidence.

So on Thursday night, Djokovic won the first set (Del Potro seemed to be a bit nervous in the beginning) and the second one went to the Argentine, after an incredible display of power and placement. Then the game was suspended.

The break worked in Djokovic favour, who on Friday, methodically outplayed Del Potro, who trying very, very hard, had no chance to get back into the match.