“Parent’s Guide to Helping Their Children” by Wayne Elderton

A question I get asked frequently is, “What can I do to help my child in tennis?” It is a great question. Numerous examples of helpful and hurtful parenting will be played out in and around tennis courts everywhere. What type of parent do you want to be?

Here are some keys to make tennis a positive force in your child’s life:

Being under-involved or over-involved won’t be effective. To help keep things in balance, and create a support system around your child, a “Teamwork Triangle” works best. The triangle consists of the child, the parent, and the coach. There must be good communication between all parties for the best results. 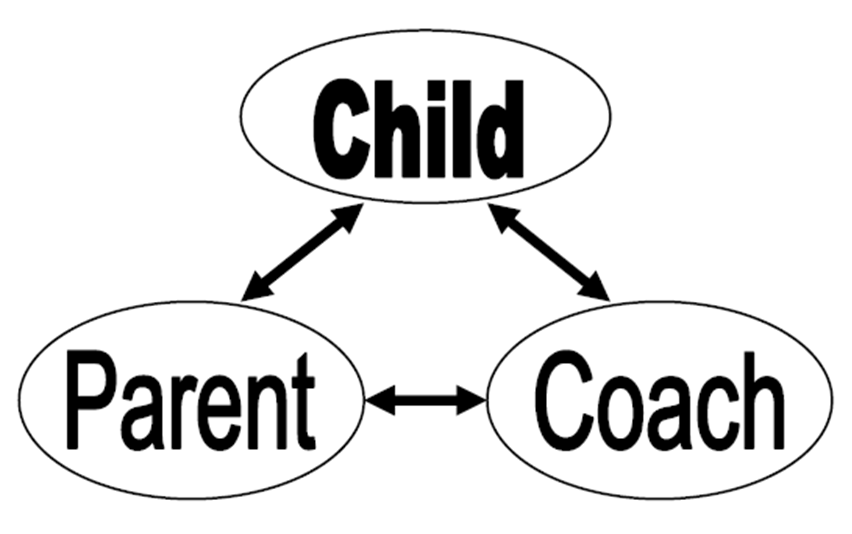 The greatest challenge for parents is to have a clear understanding of what their role is and how to maximize it. Being in an inappropriate role may conflict with the positive roles you should take. Listed below are some of the key roles parents take:

What is a “Cheerleader”? It is someone who urges you on to do your best. Someone who unconditionally supports you, whether winning or losing, having a good day or bad. This is the most important role for the parent. They are the ones usually at the tournaments with the child. They have great impact on the child’s emotional well being before and after the match. No one else can do this role as effectively as the parent! For a child to develop the best long-term competitive psychology, this supportive role is critical.

Parents need to provide a ‘safe’ environment where is OK to make mistakes (that is how everyone learns) and where the child doesn’t get an, ‘emotional beating’ after losing a match or not performing well in training. This safe emotional environment will encourage the child to get up and try again repeatedly. It will allow them to develop an “Internal” motivation for tennis, which is crucial for long-term success.

This is by far the most useful role for a parent. Tennis is an individual sport. There are rarely any team trips or group organization to tie into. This means that all the aspects of playing competitive tennis, scheduling, administration, transportation, etc, is up to the parent. They are the only ones fully aware of, and committed to, the individual needs of their child. Coaches can provide resources but cannot realistically manage all the students they train. These are the main areas a parent must manage:

This is by far the most dangerous role for a parent. On the surface, it may seem that if the parent coaches their child they will save time and money. However, the role of coach may conflict with the other more important roles (Cheerleader and Manager). When a parent takes on the role as a coach, they tend to have a misconception regarding what a coach is and does. It is not just a matter of having some technical or physical knowledge (as many parents do). They often think a coach’s role is to, ‘make the student do the right thing’. So they ignore the psychological development of the child and try to manipulate them into correct performance by getting mad, berating them, making them feel guilty, or using other negative emotional techniques.

This is not at all to say that a parent shouldn’t contribute to the child’s training. The parent is often the only available practice partner or ball feeder. They may be the only ones to follow-up on the coach’s instruction. The challenge is to remain in the other roles when practicing with the child (e.g. Manager to schedule and organize the practice, cheerleader to positively urge them on through mistakes during the practice).

Out of the 100’s of children in BC I have seen being coached by their parents (usually the Father), the rare one has done it successfully. The result of the unsuccessful attempts were at best, children quitting the sport, and at worst the relationship between parent and child being broken. Parents (as well as coaches) must remember, “Just because you have good intentions, doesn’t mean it cannot be done badly!”

Embracing (and writing down) some of the values you want to function under can help keep everything on track. Values are the emotional and relational boundaries you don’t want to violate. They mark out the characteristics you will have and what lines you will not cross. Some effective and successful values include:

Keep things in Perspective: This is, after all, kids playing a game. Keep things in line with the children’s expectations and experiences rather than imposing adult versions which cause unnecessary and detrimental pressure.

The goal of a player’s development should be playing to their potential, and reaching a personal level of excellence when they are fully mature. Winning a tournament this weekend may do nothing for their long-term success. Short-term mentality hurts a player by over-emphasizing winning over developing. Many bad habits and poor skills can be used to find ‘short-cuts’ to win that retard building skills for the long-term. For example, we all have seen the U12 player who ‘pushes’ the ball back consistently to win. The challenge is, they have one fundamental (consistency) to the exclusion of all the others. The technique and tactics required to play successfully when they are older and bigger and when every opponent is consistent and can hit the ball well are never developed. Parents especially get lulled into thinking everything is fine since they are winning.

Competitions (like tournaments) fit into a long-term development scheme by providing an opportunity to ‘test’ the skills a player is learning under competitive pressure. However, if a player, coach, or parent loses sight of that purpose, and the player was not applying the skills they are learning, development is hindered. The principle for a long-term view is simple: Developing is more important than winning. The way you talk in and around competition will reveal your values. For example, the worst question you can ask your child when they come off the court is, “Did you win?” This question reveals you are prioritizing the outcome over everything else. “How did you play” is a much better question. From there, ask them about what things they are applying from their practice sessions.

The following chart can help you complement a good coach and maximize your child’s development.

#1: Foster a sense of independence not coach dependence

Help them to be problem solvers by asking non-threatening questions. Encourage ‘finding a way’ with mistakes and failures as a valuable source of information

#2: Focus on process goals rather than outcome goals

It is what you are doing, not winning that is important

#1: Develop an athlete before developing a player

Coordination, agility, and balance will serve them for life, and improve their tennis

Rest & Relaxation are just as important to schedule as training. Minimize fatigue and maximize learning. More training is not necessarily better. NEVER should training be 7 days per week. A rest day after competition is a great idea as well.

For maximum challenge and improvement, place them in the level where they win 2-3 matches for every one they lose. Shoot for 100 matches per year (practice & tournament).