Live Update on Milos from Casey

This is my first blog on the career of Milos Raonic. Tonight I will be primarily commenting on Canada’s Davis Cup tie with Mexico this past weekend, and in particular Milos’s role in that tie.

Milos’s rapid rise in the ATP rankings has suddenly made him the number 1 singles player in Canada and in fact has made him the highest ranked Canadian Male Singles player in history. So of course he is expected to play number 1 Singles for Canada in Davis Cup. I was quite interested to see how he would handle such a honoured position, even more than I was to see how he would handle the clay courts. I had a feeling he would handle both with the poise and class that he has been showing lately but it was interesting to observe none the less.

The tie looked to be off to a great start as Frank Dancevic quickly moved to a 2 sets to 0 lead over Mexico’s number 1 Daniel Garza. But suddenly Frank seemed to change his game style by holding back on his groundies and next thing you know Garza has battled his way into a fifth set. Garza ended up winning that fifth set and just like that, Canada was down 1-0.  Milos needed to win his first match, to squelch any ideas of momentum that the Mexicans may have been feeling.

I thought the way Milos played both of his singles matches was excellent. It is my belief that the power of certain players  (and Milos is one of them) has reached a level of pace where you no longer have to change your style and try to play more consistent. Just stick with your power game and be prepared to have to hit  one or two more power shots. It is a style which we spent 1000’s of hours working on and I really don’t think he needs to adjust it in any big way to transition to the clay.  In other words,  don’t go changing your style just because your on the red stuff.  I hope he sticks to that, because if he does, he may go further than the experts (and Fernando Verdasco) think. Back in 2007 I arranged to have Ronald Agenor come to France for 10 days, to help Milos understand the art of Clay Court play prior to the start of the ITF junior clay court season. Ronald was a former ATP top 20 player whose clay court play was good enough to have defeated Guillermo Vilas 6-1 , 6-0 on clay as well as defeating Andre Agassi 3 times with no losses. His style was a very aggressive one with a huge forehand, and yet he had very good results on clay including a quarter-final appearance in the French Open, where he lost in a close match to Jimmy Connors. I felt because of his  style being very similar to Milos, that he would be the perfect fit for the task.

Ronald was also well known for his fitness ( I believe he was the oldest player in history to get himself back into the top 100 at 37 years old- read his story-it’s a very interesting one), and I believe this is when Milos truly began to understand the role of fitness in a Professionals life. Thank you Ronald.

Milos’s first singles match was against Manuel Sanchez, a player whom he knew and defeated at 16 years old in a ITF junior tournament. The outcome and the score back then was about the same as this DC match 6-2,6-1. So no real surprises. It was a routine match and Milos never looked to be in any trouble. The score this time was 6-2, 6-2, 6-1 Canada. The serve is always going to be there. But it is the excellence and power of his  ground-strokes and net play that will become more and more obvious as people become more familiar with his game.

The doubles for me was going to be the most interesting of all. Vasek Pospisil is an excellent doubles player (as is Milos) and the combination of these two should have led to a  better match than they presented. Nerves were an issue early in the match, especially I believe for Vasek. But Milos played well enough early on to keep them in it until Vasek finally felt more comfortable, and then the outcome became quite predictable. You could watch the Canadian Team’s  level improve with each game, as their confidence continued to grow, and I am very sure you will see some tremendous results from these two young men in the future. I also expect that Vasek will continue his climb up the rankings in singles. Final Score  4-6, 6-3 , 6-4, 6-4 Canada.

On Sunday Milos played the giant killer ( I’m calling Frank a giant here) Daniel Garza. Milos looked fine but started a bit slow and was broken early in just his second service game. This would have unnerved a younger Milos but like so many young men at 20 years old, he has matured and learned how to keep those emotions in check- enough to continue to think clearly and positively. So without any sense of panic he continued to do his thing and look for opportunities to get the break back. While he had a number of opportunities on his opponents next two service games he couldn’t get the break. This pattern has been questioned by some, ( including Milos) who feel that he should have a higher percentage of successful conversions off of his break point chances. I spoke with him about this in December when we had a long lunch together. He knows what he needs to do and he is doing it. While I will never divulge any specific strategic or personal information about Milos,  I will tell you that in general he wants to stay aggressive.

Milos continued to take care of his own serve and look for a chance to even the set.  He finally got that chance in the 10th game when Garza tried a couple of questionable strategic ideas ( a bad drop shot- followed by a serve and volley). It is not a good idea to allow Milos to win a point with one shot- he will win it nearly every time (just ask Stepanek- who decided very early on not to try to serve and volley against him).  Milos finally got his break back and took control of the match right there. He held and then broke again for a 7-5 first set win. The rest of the match was totally routine for Milos as he cruised home with a final score of 7-5, 6-3, 6-2. Peter Polansky finished the tie with a match sometimes known as a dead match because the outcome of the overall tie has been determined but I prefer to call it the Pride Match and Peter won it 6-4, 6-1. Well done Peter.

It is a wonderful feeling for me to be able to sit with my family and friends and watch Milos as he becomes a household name in this game of Tennis. It is a dream that we both shared for him. I especially appreciate and admire the way that he has handled himself throughout the entire process and I have no doubts that he will continue to impress everyone with his character as much as he will with his extraordinary skills. As I said in an e-mail to him last night- I cannot imagine anyone who could have handled all of this with more class and care for everyone who is demanding of his time.

His comments following the match regarding Canada and its young people etc. were amazing for an individual of 20 years old and I for one am exceptionally impressed.

I look forward to writing these blogs. Until we meet again – take care everyone and I’ll see ya soon. 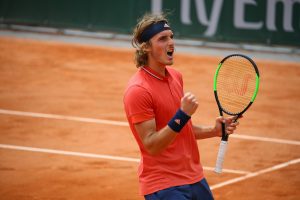 By Michal Kokta, Editor –  ONcourt In tennis, the speed of the serve has been measured for decades. It usually flashes right after the